Ajla Tomljanovic has advanced to the fourth round of Wimbledon for the first time in her career with a spirited three-set win over Jelena Ostapenko. 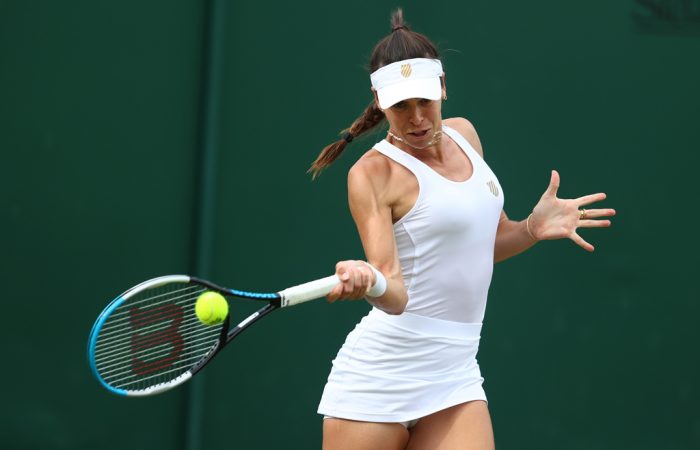 Ajla Tomljanovic’s career-best Wimbledon continues, the Australian securing her place in the final 16 with a come-from-behind win over Jelena Ostapenko.

Combining a steely resolve with careful aggression, Tomljanovic claimed the 4-6 6-4 6-2 win over Ostapenko – who as world No.34 is ranked 41 places higher – in just under two hours.

“There were so many small steps that I had to take over the last year where, you know, wins that maybe to someone don’t look big but to me were so precious,” said Tomljanovic, who admitted the wait to reach the second week of a Grand Slam for the second time in her career had been difficult.

“Making the fourth round here is just such a huge pat on the back to myself and the people around me that saw it. I’m very proud of that, no matter how I go from here.”

The match appeared set for a different course earlier, when the big-hitting Ostapenko broke the Tomljanovic serve in the opening game. The Australian recovered from a second break of serve before Ostapenko secured the rain-interrupted opener in 33 minutes.

Ostapenko was equally authoritative as she opened the second set with another break of serve, but while her fearless winners had earlier delivered winners, the Latvian became increasingly error prone as the Australian opponent pressured.

A composed Tomljanovic levelled for 2-2 and with her confidence growing, claimed the set in 40 minutes.

After finally wrestling momentum in her favour, Tomljanovic was leading 4-0 lead in the final set when Ostapenko left the court for medical treatment. Furious at the interruption, the 28-year-old dropped serve on resumption.

The glitch proved temporary, the Australian channelling her frustration into impressive groundstrokes. She finally secured victory after an Ostapenko error in an extended rally.

“My feelings towards winning exceeds any drama that happened, because for me it’s a huge moment in my career,” said Tomljanovic of a tense exchange that arose from the injury break.

“I’m extremely happy to be in the fourth round for the first time, especially here in Wimbledon.”

It followed Tomljanovic’s three-set win over the higher-ranked Alize Cornet in the second round, and ended Ostapenko’s run of seven straight match wins. The Latvian claimed a fourth career title in Eastbourne last week and was a semifinalist at 2018 Wimbledon.

Tomljanovic will prepare for a fourth-round meeting with Emma Raducanu – an 18-year-old Brit, who has capitalised superbly on her wildcard entry with a trio of straight-sets match wins – knowing the value of persistence.

Marking only the second time that she’s progressed beyond the second round at a major, Tomljanovic has equalled her career-best Grand Slam result of a fourth-round appearance at Roland Garros seven years ago.

“Emma has been playing great.” said Tomljanovic.” She will definitely have the crowd, but I think it will be my first experience on a bigger court in Wimbledon, so crowd, no crowd, I think it’s going to be so fun for me just go out there and play.”