Thompson advances to third round at Wimbledon

Australian Jordan Thompson is enjoying a career-best run at Wimbledon, where he has advanced to the third round for a first time. 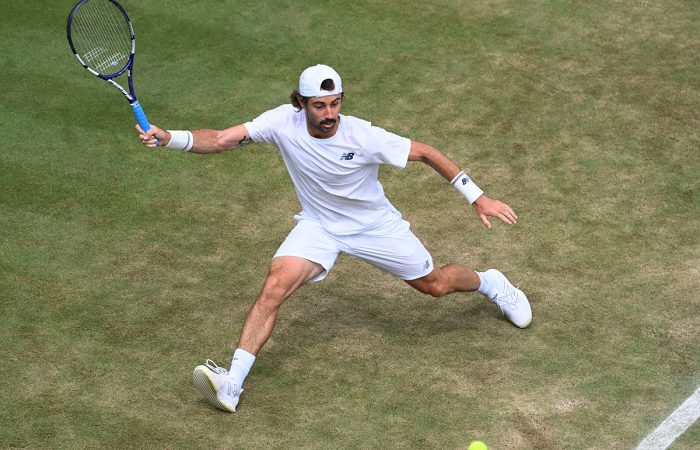 Jordan Thompson has continued his career-best run at Wimbledon, progressing into the third round.

Today the 27-year-old achieved another breakthrough, recording his first Grand Slam win against a major finalist. And once again, Thompson had to fight hard to overcome a quality opponent.

It appeared Thompson was going to score a straight-sets win when he edged ahead 4-1 in the third set, but Nishikori proved his class to push the match into a fourth set.

The momentum swung early in the fourth set – Thompson went ahead 3-1, only for world No.53 Nishikori to level at 3-all.

But it was Thompson who stepped up in the final stages, breaking to love in the eighth game. From there, the world No.78 dutifully served out victory after three hours and five minutes on court.

Thompson finished the match with 38 winners and just 22 unforced errors, proving too solid for the two-time Wimbledon quarterfinalist. The Australian, who had never progressed past the first round in four previous visits to the All England Club, also served 12 aces and won 81 per cent of first serve points.

“Things can change quickly. Walked in yesterday, never won a match at Wimbledon, today in the third round playing one of the better matches I’ve played in my career,” said Thompson.

“A hell of an achievement, definitely. Nishikori is one of the best in the world. I served and returned very well, played good grass-court tennis. It’s in my top 10 wins.”

Thompson now faces world No.79 Ilya Ivashka of Belarus in the third round.