A decade since claiming the Wimbledon girls’ title, Ash Barty returns to the All England Club with a tribute to Evonne Goolagong Cawley, her long-time mentor and friend. 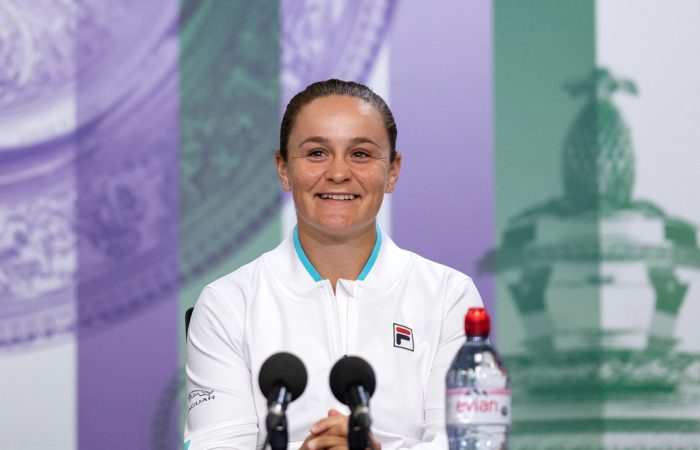 Powerful memories will be at play when world No.1 Ash Barty steps onto Centre Court to contest her first match of the 2021 Championships.

Fifty years since Evonne Goolagong Cawley claimed the first of two Wimbledon triumphs, the younger Australian will wear an outfit designed to honour her long-time friend and idol.

“Evonne has guided the way. She’s created a path for all of us as Australians, but as a family and for our heritage to know that there is an opportunity to chase after your dreams and to do what you love.

“She’s created a legacy like no other in Australia. I think I’m exceptionally proud to be able to call her a friend and a mentor, to be able to share heritage. For me to be able to pay tribute to that on a really special anniversary is something that I’ll never forget.”

There’s another significant memory in Barty’s Wimbledon triumph from a decade ago, when the then 15-year-old defeated Irina Khromacheva to lift the 2011 girls’ trophy.

“Yeah, it was a lifetime ago. It really was. I’ve learned so much between now and then. I’ve grown so much as a person and as a tennis player,” a smiling Barty reflected.

“Reliving those memories from my first time here at the All England Club, I think is just remarkable to think of almost in a way how raw I was and how inexperienced. Everything was so new. Everything was really scary and really big.

“But I think every single time I walk into the gates here at the All England Club I remember those matches from junior Wimbledon, my first experience being an incredibly positive and exciting one.”

In the 10 years since that junior milestone, Barty’s love for the grass-court Grand Slam has only grown. “This club has so much history. I think in a way, tennis was born here and I think to be able to have the opportunity and to be privileged to be able to play on these courts year-in, year -out is something I’ll never take for granted,” she said.

“It’s one of the best times of the year and I think every single player relishes the opportunity of playing here at Wimbledon and for me it’s certainly no different.”

A fifth main-draw Wimbledon campaign is arguably even more special for the 25-year-old, after injury ended her recent Roland Garros campaign in the second round.  With several weeks of rest and rehabilitation completed, Barty insists she’s “good to go”.

“It’s been a while since I’ve stood foot on a grass court. To be able to do it here at Wimbledon is really special. I mean I’m just really excited to get started,” the Queenslander related.

“This tournament is like no other all across the whole world and to be able to have another opportunity to play here is really exciting.”

There’ll be yet more emotion when Barty faces Carla Suarez Navarro in the opening round.

The defending ladies’ champion traditionally opens Centre Court play on the second day of The Championships but after 2019 winner Simona Halep withdrew through injury, Barty was granted the honour instead. “It’s incredibly special. It’s very exciting and I think for me personally, it’s humbling,” she said.

Barty is especially grateful to share the court with Suarez Navarro after the Spaniard completed treatment from Hodgkin’s Lymphoma earlier this year.

“First and foremost, it’s going to be an amazing experience for me to play against Carla. All that she’s gone through is just showing that she’s a person with tremendous character, tremendous strength and I think you couldn’t wipe the smile off everyone’s face when we saw her come back on tour earlier this year,” said the No.1 seed.

A first career meeting with the Spaniard carries many opportunities for the famously strategic Australian, who explains “I’m excited that I get to test myself against one of the very best.”

“She’s been on tour for over 10 years at the very highest level and I think whenever you get to challenge yourself against someone who’s had that longevity and has that much experience, you know it’s never ever going to be easy,” Barty noted.

“I’m really looking forward to the challenge and kind of the problem-solving that’s going to be required to find my way into that match and to find a way through.”

While just 25, there’s also a growing sense of longevity in Barty’s own accomplishments – especially as she reflects on how much she’s developed since she first lifted a Wimbledon trophy at age 15.

“I think now I’m a lot more calm. I feel a lot more comfortable in my own skin and I know that all the work that I do behind the scenes with my team is enough for me to be the best version of myself,” Barty reasoned.

“I think that’s a really important part of the experience and the learnings that come with playing on tour.”

> Read: Ten Aussies in action on Day Two at Wimbledon