Alex de Minaur exits to top seed Matteo Berrettini in the Queen's semifinals, but will take heart from a solid start to the grass-court season. 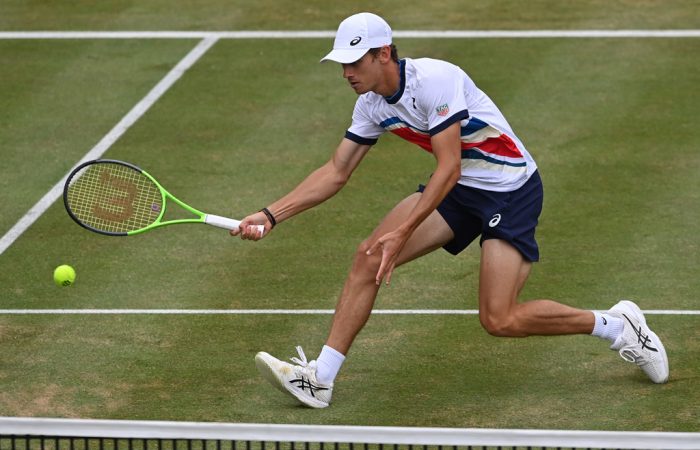 Alex de Minaur’s winning run at Queen’s is over, top seed Matteo Berrettini proving too tough for the Australian in their semifinal.

The Italian claimed a 6-4 6-4 win in 84 minutes, dashing De Minaur’s hopes of progressing to a ninth ATP singles final.

Berrettini, ranked world No.9, hit eight aces and won 89 per cent of his first serve points, securing service breaks over De Minaur in the third game of the first set and the ninth of the second.

But the 22-year-old Australian will take heart from a solid start to his grass-court season, after a quarterfinal run in Stuttgart and wins this week over Laslo Djere, countryman John Millman and former Wimbledon finalist Marin Cilic.

While yet to win a title on grass, De Minaur’s is delighted to compete on the surface.

“It’s probably the only surface you see people diving around the court and you see a different type of tennis,” he told the ATP Tour. “It’s actually very fun and very enjoyable.”

V A M O S 🇦🇺@alexdeminaur pumped to reach the Queen’s semis with a 3-6 6-3 6-4 win over Cilic #cinchChampionships pic.twitter.com/PPCvq2QgNw

De Minaur has also progressed to the semifinals in doubles alongside British partner Cameron Norrie.

John Peers and American team-mate Reilly Opelka lead 7-6(3) 2-2 in their semifinal, which was suspended overnight due to rain in London.

It creates positive momentum as De Minaur prepares for his next tournament in Eastbourne, where he is the No.2 seed. The Australian has a first-round bye, before a possible meeting with Frances Tiafoe or Liam Broady.