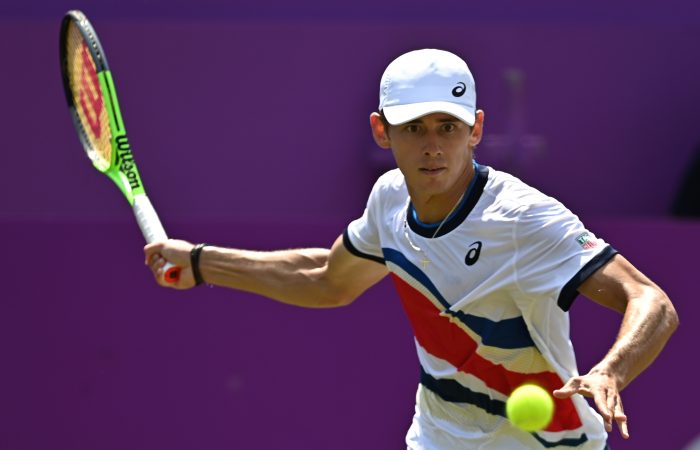 An Australian is guaranteed to progress to the doubles final at an ATP 500 tournament at Queen’s Club this week.

Alex de Minaur and Brit Cameron Norrie continued their impressive run, advancing to the semifinals with a 3-6 6-4 [10-6] victory over Australian Max Purcell and Russian Aslan Karatsev.

It is a first doubles semifinal appearance of the season for 22-year-old De Minaur.

Their semifinal opponents are Australia’s John Peers and American Reilly Opelka, who stunned the top seeds in the quarterfinals.

Peers and Opelka conceded a mere three games against Croatian duo Mate Pavic and Nikola Mektic, who were aiming to win their seventh title of the season.

But for now, De Minaur’s focus is on a singles quarterfinal showdown against Croatian Marin Cilic this evening.

Cilic, a former world No.3 and Wimbledon 2017 finalist, is on a seven-match winning streak after clinching the Stuttgart title last week. The world No.37 won his only previous meeting against the No.22-ranked Australian, which was a five-set third-round battle at the US Open in 2018.

“If I can play my best tennis, there’s always a chance,” De Minaur said of the match-up.

Australia’s Ellen Perez is through to her fourth tour-level doubles semifinal of the season.

The 25-year-old, who is teaming with Tunisia’s Ons Jabeur at a WTA 250 tournament in Birmingham this week, scored a 5-7 6-2 [10-5] quarterfinal win against Brits Tara Moore and Eden Silva.

Their semifinal opponents are yet to be decided – but will be either top seeds Hsieh Su-Wei and Elise Mertens or wildcard pairing Naiktha Bains and Tereza Martincova, who play their quarterfinal match tonight.