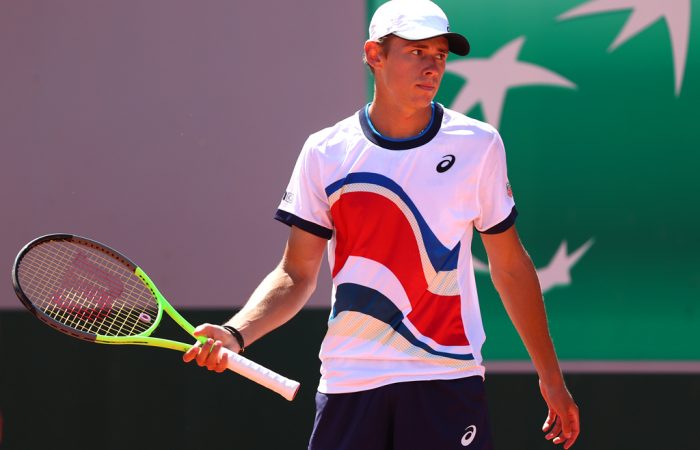 Alex de Minaur has progressed safely into the second round of Roland Garros, matching his previous-best performance at the clay-court Slam.

De Minaur needed his trademark determination to manage his 29-year-old opponent – after securing a double break of serve to take the first set in 37 minutes, the Australian worked hard to save six break points in the second game of the second set.

While De Minaur managed that challenge and went on to gain a two-set advantage, it was a testing third decider for the No.21 seed.

Travaglia clawed back a break of serve to force it to a tiebreak, where De Minaur was at last able to gain the upper hand.

“I’m actually very happy with that win,”  said De Minaur, who closed out victory by forcing a Travaglia error.

“It’s a very tricky match and coming in, I obviously had a lot of respect for him and respect for this match because I knew it was a very complicated match where I think I handled my side of the court exactly as I needed to.

“I got the job done, weathered the storm at times and managed to beat a very good clay-courter, so I’m happy with that.”

Victory over the world No.83 would mark a career-best performance for Australia’s top-ranked male and atone for an upset loss to the Italian in the first round at Roland Garros last year.

“(He’s) another clay-courter, (a) very, very tough opponent,” De Minaur noted. “Look, it’s another opportunity for me to go out and show what I can do on the clay.”

De Minaur, who is contesting the Roland Garros main draw for a fifth time, is yet to progress beyond the tournament’s second round but takes confidence from both a strong start against Travaglia and summoning resilience when required.

“Especially here at Roland Garros, getting a good start is such a big important step so I am very happy I was able to start well and kind of get that two sets to love lead and scrape (through) that third set,” he reflected.

“It’s all about just slowly trying to get better and better on the clay and here at the French, so I’m happy to get a win under my belt and building confidence through it.:

De Minaur was the second Australian to advance on third-day action in Paris, with Astra Sharma also achieving a straight-sets win.

World No.1 Ash Barty survived a first-round test later in the day, while James Duckworth recorded his first main draw win at Roland Garros in an outstanding day for Aussie players.