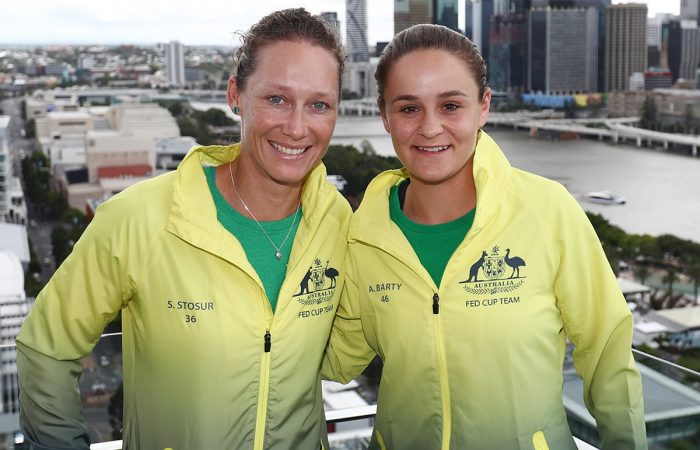 As world No.1 Ash Barty competes at Roland Garros this fortnight, she’ll have many Australian fans cheering her on from afar. This includes Roland Garros 2010 finalist Sam Stosur.

A foot injury has forced Stosur to withdraw from this year’s tournament, meaning the 37-year-old will watch the tournament from her Melbourne home.

Stosur is tipping Barty to be a title contender.

Stosur is well qualified to judge. She boasts a 40-16 career win-loss record at Roland Garros, where she has advanced to the singles semifinals on four occasions.

Barty, who won the Roland Garros title in 2019, enters the tournament with a season record of 11-2 on European clay and having won 23 of her 26 matches across both singles and doubles in the past two months.

“That’s a hell of a lot of matches to play in such a short amount of time,” Stosur said of Barty’s recent results.

A right arm injury meant the 25-year-old Australian had to withdraw from a Rome quarterfinal earlier this month, but Stosur believes that injury won’t impact her chances in Paris.

“I think it was probably a sensible decision to not push too hard in the week or two before Roland Garros, where we’ll all be looking for her to do well,” Stosur said.

“She’s playing very well, like we’ve all seen. I wouldn’t be too concerned about her injury. I think that’s something she struggles with on and off throughout the year depending on the conditions. I’m sure she’s rested up, had a few days off, got some good practice in and she’ll be 100 per cent going into her first match.”

“But it’s a Slam, you never know what can happen. There’s always going to be upsets and a dark horse coming through,” Stosur said.

“If it’s anything like last year, you’ll see a qualifier make semis. It should be a really exciting event.”

De Minaur, who is the No.21 seed in the men’s singles draw, has typically struggled at Roland Garros. He has recorded one win from his past four appearances – but Stosur notes, she too had a poor record in Paris early in her career.

“I (barely won) a match at Roland Garros for five years, then it turned into being my best tournament almost,” she said.

“I think Alex can compete with the best of them on any surface. He’s obviously not the biggest guy, but he’s certainly one of the most physical, willing and determined players out there. He does well with grinding points out. Obviously it does depend on certain match ups, but I think Alex is always exciting to watch, no matter what surface he is on.”