As final qualifying round matches begin in Paris, we have four Australian players still in contention to earn a coveted main draw spot at Roland Garros 2021. 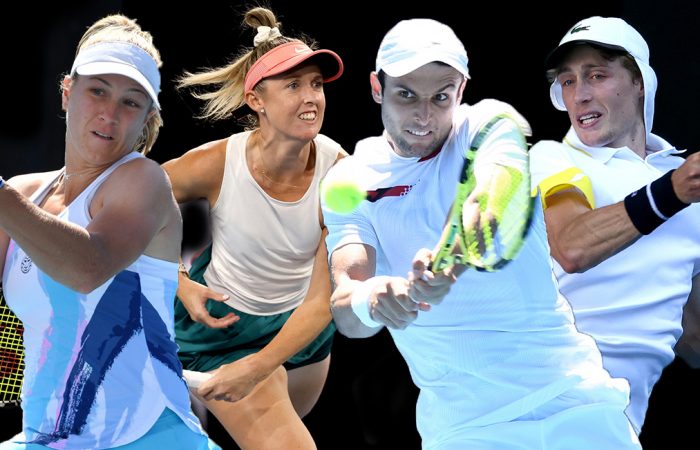 It takes determination and perseverance to qualify at a Grand Slam tournament, qualities which our last remaining Aussie hopes have shown in abundance so far this week at Roland Garros.

Four Australians – Ellen Perez, Storm Sanders, Aleksandar Vukic and Marc Polmans – are through to the final qualifying round in Paris, the most to progress to this stage since 2014.

As final qualifying matches begin, they each face one last challenge. The big question is, who can earn their place in the main draw?

Ellen Perez (AUS) v [17] Greet Minnen (BEL)
Women’s singles qualifying, final round, Court 6, first match (from 6.30pm AEST)
Perez has won two tough three-set battles to advance to the final qualifying round at a major for the first time in her career. The 25-year-old from New South Wales faces another big test against Belgian Greet Minnen, the world No.125 who has reached this stage four times previously. However, the left-handed Perez, who at world No.239 is one of the lowest-ranked players in the draw, has proved this week she has plenty of fighting spirit.
Head-to-head record: First career meeting

[31] Marc Polmans (AUS) v [14] Bernabe Zapata Miralles (ESP)
Men’s singles qualifying, final round, Court 11, second match
The 24-year-old Polmans is aiming to qualify at a Grand Slam for a first time. The world No.149 has twice reached the final qualifying round stage before, including last year in Paris. Standing in his way is a 24-year-old Spaniard in career-best form. Zapata Miralles, who is ranked No.128, is making his Roland Garros debut and had never won a major-level match before this week. Their only previous meeting was on clay, which proved a tight encounter.
Head-to-head record: Zapata Miralles leads 1-0
Last meeting: Zapata Miralles won 6-3 5-7 6-4, Lisbon, 2019

Aleksandar Vukic (AUS) v Bjorn Fratangelo (USA)
Men’s singles qualifying, final round, Court 7, third match (not before 9.30pm AEST)
Vukic has extended his career record in Roland Garros qualifying matches to 5-0 this week – can he continue his winning streak and qualify in Paris for a second year in a row? Impressively, all of the wins for the 25-year-old from New South Wales, who is currently ranked No.208, have been against higher-ranked opponents. Vukic plays world No.197 Bjorn Fratangelo in the final round, a 27-year-old American who won the Roland Garros boys’ singles title in 2011.
Head-to-head record: First career meeting

Storm Sanders (AUS) v Susan Bandecchi (SUI)
Women’s singles qualifying, final round, to be played Friday
Through to the final qualifying round at a Grand Slam for the first time in her career, Sanders is hoping to record another new first. Victory against world No.219 Bendecchi would earn the 26-year-old a Roland Garros singles main draw debut. The No.161-ranked Sanders, who is yet to drop a set in Paris this week, will have to wait a little longer for such an opportunity. This match against the 22-year-old Swiss is not scheduled until tomorrow.
Head-to-head record: First career meeting