Four Australians - Marc Polmans, Aleksandar Vukic, Ellen Perez and Storm Sanders - are through to the second round of qualifying at Roland Garros. 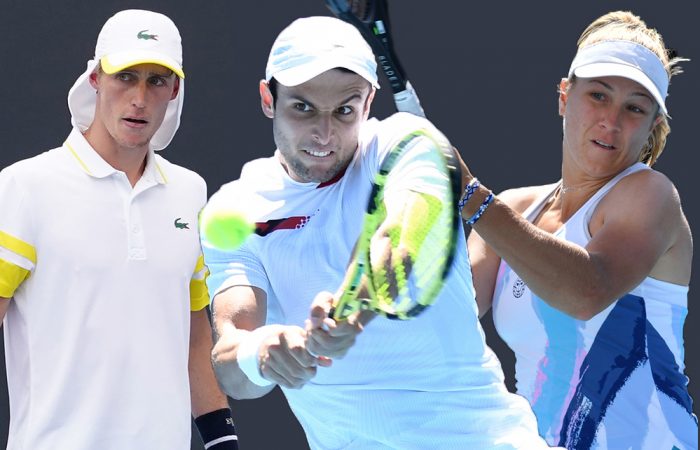 Qualifying action continues at Roland Garros this evening, where we have four Aussies competing in second-round matches …

[31] Marc Polmans (AUS) v [WC] Arthur Fils (FRA)
Men’s singles qualifying, second round, Court 7, first match (from 6.30pm AEST)
Through to the second round of Roland Garros qualifying for the fourth time in his career, world No.149 Polmans now faces 16-year-old French wildcard Arthur Fils. Although Fils is ranked No.1034, he proved he is one to watch with a first-round victory against Bernard Tomic. Polmans, a 24-year-old from Melbourne who defeated compatriot Alex Bolt in the opening round, is looking to match last year’s effort of reaching the final qualifying round.
Head-to-head record: First career meeting

Ellen Perez (AUS) v Alexandra Dulgheru (ROU)
Women’s singles qualifying, second round, Court 2, first match (from 6.30pm AEST)
Perez made an stellar Roland Garros singles debut, defeating world No.154 Vitalia Diatchenko in the first round. The 25-year-old from New South Wales, who is ranked No.239, faces a new challenge against Dulgheru. The 31-year-old Romanian is a former world No.26 who is returning from knee surgery. Dulgheru, who is currently ranked No.444 and eliminated No.12 seed Wang Yafan in the opening round, is contesting her first major tournament in three years.
Head-to-head record: First career meeting

Aleksandar Vukic (AUS) v Viktor Troicki (SRB)
Men’s singles qualifying, second round, Court 2, second match
Only three spots separate them in the rankings – Troicki at No.205 and Vukic at No.208 – but the 35-year-old Serb, who is contesting his final Roland Garros, has an edge in experience. Troicki is a former world No.12, who has advanced to the fourth round in Paris on three occasions. The 25-year-old Vukic, however, boasts a 4-0 win-loss record in Roland Garros qualifying matches and impressively only lost eight points on serve while dismissing world No.168 Frederico Ferreira Silva in the opening round.
Head-to-head record: First career meeting

Storm Sanders (AUS) v Cagla Buyukakcay (TUR)
Women’s singles qualifying, second round, Court 4, fifth match
After scoring a first singles victory at Roland Garros, 26-year-old Sanders has her sights set on continuing her winning run and advancing to the final qualifying round at a Grand Slam for the first time in her career. The world No.161, who confidently eliminated No.24 seed Katarzyna Kawa in the opening round, plays Turkey’s Cagla Buyukakcay. The 31-year-old Buyukakcay is presently ranked No.178, but has been as high as No.60 and has recorded her best career results on clay.
Head-to-head record: First career meeting