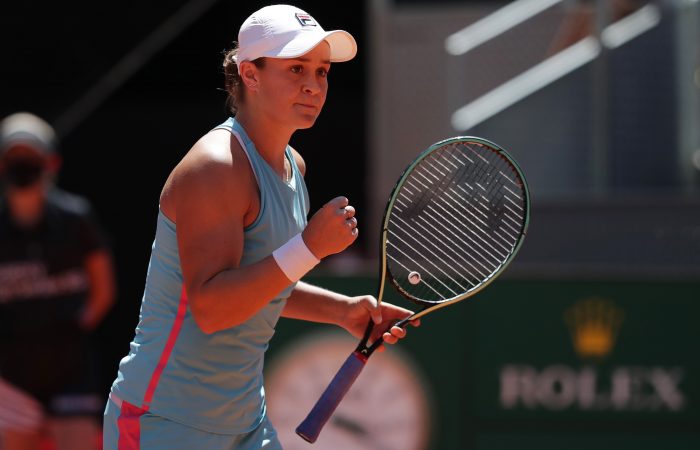 Ash Barty continues to pile up some impressive numbers this season.

The 25-year-old Australian extended her winning streak on European clay to 15 matches with a 6-1 3-6 6-3 victory against Czech Petra Kvitova in the Madrid Open quarterfinals.

It is Barty’s 24th win of the season and improves her record against top 20-ranked opponents so far this year to 10-0.

“I think I started off particularly well, and I think Petra struggled to find the court a little bit,” Barty said. “I felt like she gave me a lot of cheapies, particularly in runs of two, three, four in a game. Which is always hard to kind of readjust and tactically keep doing what you’re doing, knowing that a lot of the times it was out of my hands.”

The world No.12 fought back to claim the second set, but Barty found a way to regain the momentum and extend her season record in three-set matches to 11-1.

“I think it’s important not to panic, but everyone emotionally has different ways that they play on the court. I have always been quite calm on the court. That’s just always been my demeanor. But for me, it’s more about just trusting myself and knowing that we just keep chipping away and trying to find a way – and then give yourself time to do that.”

Barty’s semifinal opponent is 23-year-old Spanish wildcard Paula Badosa, the world No.62 who defeated her at Charleston last month.

The world No.1 has won eight consecutive matches since her shock straight-sets loss to Badosa, including five against top 20-ranked opponents.

“She’s the No.1 in the world,” Badosa said ahead of their rematch. “Now she knows me. No. 1 in the world, they don’t like to make mistakes two times in a row, so for sure I expect a tough match and completely different to Charleston.”

Popyrin impressively hit 31 winners to nine against the world No.18 to move into the final 16 at an ATP 1000 tournament for the first time in his career.

The reward for No.76-ranked Popyrin is a third-round showdown with top seed Rafael Nadal.

“I’m going to give it my all, put in a fight,” Popyrin said of his first career meeting with Nadal, who is a five-time Madrid champion.

“I’m going to go out there believing that I can actually play because I believe I do have the level to play with him, even if it is his favourite surface, (even) if he is playing at home. All the cards are in his favour right now, but I don’t mind being the underdog. I have been the underdog for most of my career.”

> SOCIAL ROUND-UP: Find out what our Aussie players have been up to this week