Ash Barty is on track to defend a title for the first time in her career after advancing to the final of the Miami Open. 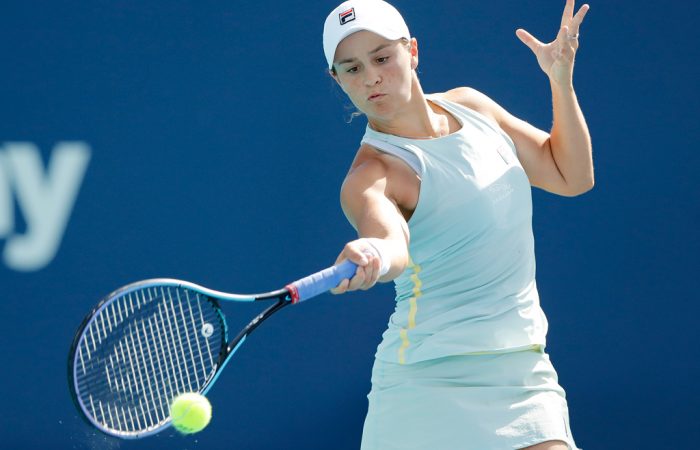 Ash Barty will contest the 15th singles final of her career at the Miami Open, after a resounding victory over Elina Svitolina.

Barty, the defending champion of the top-tier tournament, has now won 11 straight matches in Miami.

In her first tournament outside Australia in more than a year, Barty has also claimed wins this week over Aryna Sabalenka, and Grand Slam champions Victoria Azarenka and Jelena Ostapenko.

The Australian saved a match point in her opening match against qualifier Kristina Kucova.

Back to back Miami Open finals! 🙌@ashbarty secures a spot in the final once again after defeating Svitolina, 6-3, 6-3.#MiamiOpen pic.twitter.com/RdlpKDxCzU

“It’s really exciting,” said Barty of overcoming those challenges to reach back-to-back finals at the tournament .

“Obviously that’s the goal for any tournament you play. You always want to give yourself a chance to try and hold the title at the end, so (it’s)  an exciting opportunity now that we’re in another final here in Miami.”

While three of her previous four matches went the full three-set distance, Barty retained careful control over Svitolina in the semifinal.

The top seed started with authority, breaking the 25-year-old’s serve in the opening game then breaking again to claim a 4-1 advantage.

While the fifth-seeded Ukrainian claimed one service break back, Barty saved two of three break points to claim the first set in 41 minutes.

After leaving the court for a medical timeout, which she later explained as a slight abdominal problem, Barty maintained steely focus.

Claiming important breaks in the fourth and sixth game – the Queenslander surrendering one more break of her own – she secured victory with a forehand winner.

It was one of her 28 winners for Barty, who also utilised her trademark slice backhand superbly and served seven aces. Withstanding pressure, she saved five of Svitolina’s seven break point opportunities.

Barty had entered the match with a 1-4 head-to-head record against Svitolina (1-5 if Fed Cup matches are counted), adding an extra layer of satisfaction to today’s victory.

“Each match that we’ve played I’ve felt like it’s gotten closer and closer. Now the head-to-head is very, very slowly starting to improve but Elina’s an exceptional competitor. She’ll never give you a free point,” said Barty.

“Knowing how good a mover she is and how many balls she makes you play, you’re going to make errors. It’s just about getting that fine line and getting that mix right.”

With victory over Svitolina, the Queenslander built on stunning momentum in Miami.

The tournament is the scene of significant career turning points for Barty, who defeated three top 10 opponents – Kiki Bertens, Petra Kvitova and Karolina Pliskova – to lift the 2019 trophy.

The biggest title of her career at the time, Barty earned 1000 rankings points to make significant inroads towards the world No.1 ranking.

Achieving that No.1 milestone soon after becoming the Roland Garros champion in 2019, Barty will maintain her position at the top of the rankings after this year’s progress in Miami.

Barty, who is aiming to defend a title for the first time in her career, faces Bianca Andreescu in the final.

“I haven’t played with her before, I haven’t hit with her. so it’s a fresh one for both of us,” said Barty.

“But she’s proven time and time again that she loves the big matches, loves the big tournaments and has the game and the physicality to win them.”