Barty moves into Miami fourth round, Aussie men bow out

Ash Barty moves into the Miami Open's final 16, but Australian men Alex de Minaur, Jordan Thompson and Thanasi Kokkinakis all exit in the second round. 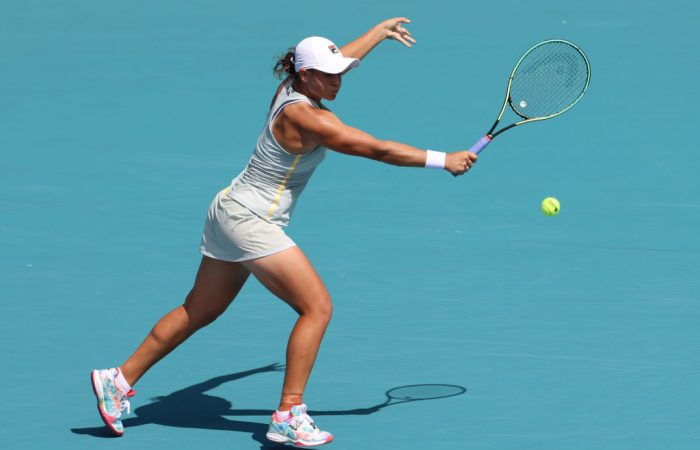 It marks an eighth straight match win for Barty in Miami, who defeated Karolina Pliskova in the final to seize the 2019 title – at the time, the biggest win of her career.

Barty’s latest match in Miami was in stark contrast to her 2021 opener against Kristina Kucova, when the world No.1 saved a match point in a battle extending almost two-and-a-half hours.

In an efficient performance against the world No.54 from Latvia, Barty struck nine winners and dropped serve only once, doing so in the second game of the second set.

The 24-year-old responded superbly to the only hit of adversity, claiming the last six games of the match to complete her convincing win.

“Today felt like I was a lot sharper and switched on and ready to go from the very first point,” said Barty, who is playing her first tournament outside Australia since reaching the Qatar Open semifinals in February last year.

“The goal today was to try to bring the tennis back to my kind of tempo and my kind of rhythm as often as possible and as quickly as possible in points.”

With one Grand Slam champion dismissed – Ostapenko was the winner of the 2017 Roland Garros title – the Australian will now face another one.

Ash Barty back into the Round of 16 after winning the battle of Roland Garros champions. Solid work in breezy conditions to defeat Jelena Ostapenko.

It was a tougher day in Miami for Australia’s male players, with Jordan Thompson, Alex de Minaur and Thanasi Kokkinakis all bundled out.

Thompson was a victim to No.12 seed Milos Raonic, the Canadian recording a 6-2 6-1 win in their second round.

And while Alex de Minaur fought customarily hard against Daniel Elahi Galan, the Colombian claimed an upset 4-6 6-3 6-4 win over the No.15 seed.

Ranked No.113 compared to world No.23 De Minaur, Galan took two hours and 23 minutes to seize the biggest win of his career.

But Kokkinakis would take heart from the form he displayed against No.29 seed Marton Fucsovics, who took more than three hours to record 7-6(3) 6-7(4) 6-4 win.

A qualifier in Miami, Kokkinakis saved three break points before surrendering the first set to the Hungarian in just over an hour.

In a near-replica second set, the Australian levelled the score by claiming the tiebreak.

But with the first break of serve surrendered in the fifth game of the decider, the world No.40 Fucsovics at last gained an advantage.

While Kokkinakis claimed his own service break to level at 4-4, he wasn’t able to consolidate. Fucsovics edged ahead with another break of serve, before finally serving out the match.

Still, there was much for Kokkinakis to take from his Miami run.

Firing seven aces and recording only three double faults, Kokkinakis in fact won four more points in total than Fucsovic’s 112. He extended his tiebreak record in 2021 to 8-1.

Returned to the tour in 2021 after a year mostly sidelined, the former world No.69 pushed Stefanos Tsitsipas to five sets in the second round of the Australian Open – and should progress continue at its current rate, Kokkinakis will make steady improvements on his current ranking of world No.243.