Ash Barty: “Stay true to yourself”

On International Women’s Day, world No.1 Ash Barty notes the power of taking an individual path in any endeavour. 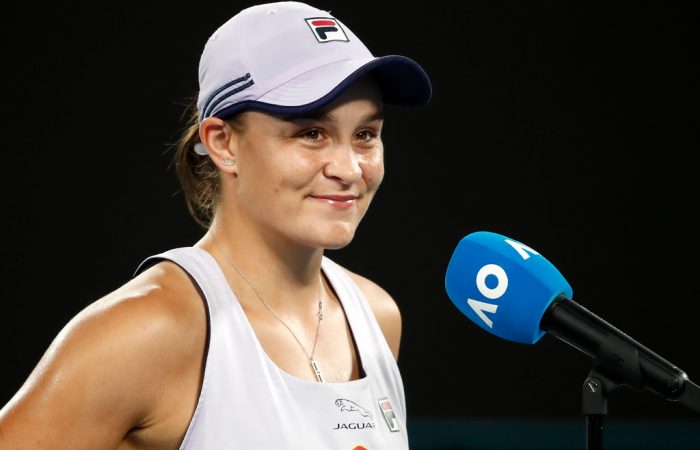 Widely acknowledged for both her personal and professional qualities, Ash Barty has long been aware of the positive example she sets to others.

But that’s especially true on International Women’s Day, which has a theme of ‘Choose to Challenge’ in 2021.

“I hope I can help inspire women and girls to believe in themselves and have the courage to do things their way,” said Barty.

For the Queenslander, that meant overcoming several barriers as she pursued her path to become a professional tennis player. One of them was her physicality.

“I was told I was too short to play tennis, but I didn’t give up on my dreams,” related the 166cm Barty.

Persistence delivered powerful rewards, with the world No.1 now counting the 2019 Roland Garros and 2019 WTA Finals titles among the nine professional singles titles she’s claimed over the past five seasons.

But it’s perhaps the way the top Australian has gone about achieving those milestones that resonates most strongly.

After ascending to Grand Slam heights and the top of the rankings in 2019, Barty was honoured with the coveted “The Don” at the Australian Sports Awards and as the 2020 Young Australian of the Year – underlining that her personal qualities are as notable as her playing ones.

Reflecting on the inspiration that she provides to other women, the 24-year-old noted: “Whatever you choose to do in life, stay true to yourself and have a smile on your face.”

It’s an outlook that’s increasingly reflected by other Australian women making their mark in professional tennis.

“All of our Aussie women and juniors are familiar with Ash. They aren’t just team-mates but are genuine friends,” said Molik, noting how the world No.1 sets a positive example to fellow Queenslanders Lizette Cabrerra, Priscilla Hon and Olivia Gadecki at the National Tennis Academy in Brisbane.

“It’s being in that environment that I think makes you feel like you can do it. I get the sense that they’re all, I guess, being carried through in a wave and it will inspire them.

“I feel like they’re all pretty proud to be a part of what Ash is doing too … which is a nice part of Australian women’s tennis.

“Everyone’s happy for each other and genuinely excited when they perform and win and succeed.”

“I invited her to do a pre-season with us knowing she’s a brilliant girl first and foremost and then a hell of a ball striker after that,” explained Barty, who remains an accessible role model to the younger player.

“I’ve got a lot of respect for her, and I just told her that I’m always only ever a phone call away. Any experiences she’s gone through, obviously she stepped away from the game a little bit, not at a dissimilar age than I did.

“So I think talking about that experience as well from my point of view and just sharing my story was really nice. But I just have a lot of time for her as a human being. She’s a great girl.

“I’m just so proud of the way she went out there yesterday and played, did it with a smile on her face.”

Much like Barty herself – one of the many females in tennis with the power to inspire on International Women’s Day.