After overcoming serious challenges to establish her own career, regional WA coach Megan Henry is now inspiring other women to follow her inspirational path. 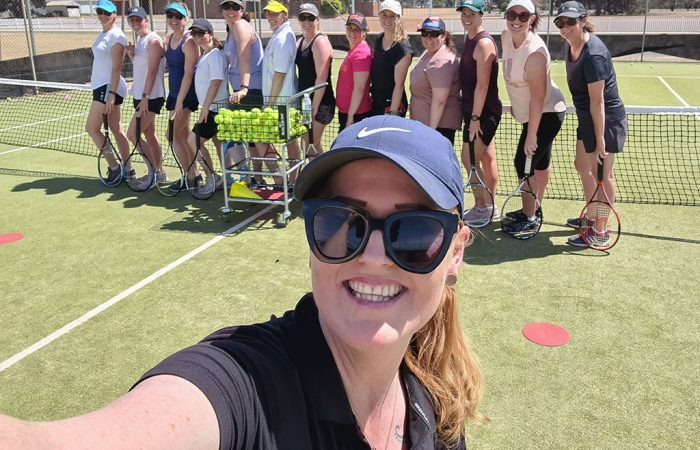 “You only live once, but you get to serve twice.”

A motto for life, according to Megan Henry – though you’d be forgiven for thinking the regional coach has lived far more than that, going by her accomplishments.

Born and raised in Albany, the proud Western Australian has been coaching regional tennis for over 18 years. Settled in the town of Wagin, a three-hour drive south-east of Perth, she previously spent many years as a sheep shearing contractor, and has authored a raw and poignant memoir, which covers her journey to becoming a tennis coach.

Throughout Henry’s life, and especially her hardships, tennis has been a critical constant.

“My nanna always told me, ‘Sport solves everything’.”

First picking up a racquet at the age of eight, Henry says her inspiration to play came from her mother.

“My mum was a beautiful tennis player,” she says. “I’m very passionate about mums in tennis because nearly everyone I coach, junior or adult, if I ask them who inspired them to play tennis, they always say their mum.”

Henry explains that sport, and tennis in particular, has always been an integral part of life in any country town.

“We live so rurally. You might not see someone for weeks,” she explains. “But you make a point of going into that event or that social tennis hit just to connect with people. It’s just so important.”

Around age 10, Henry had a lightbulb moment. “A lady moved to town and she was a tennis coach. And I could not believe it.”

It had never occurred to little Megan that a woman coaching tennis was even possible. Through all of her exposure to the game and years of playing juniors, she’d never come across a female coach.

“So she was pivotal,” Henry says of coach Alison Kirk. “She actually gave me the insight that I could possibly do this when I was an adult.”

Tennis is for everyone!

If you’re willing to get out there, try something new and make great friends while doing so, tennis is for you. We’ve made it easier than ever to connect with your local club and hit the court.

Henry’s determination to continue in Kirk’s footsteps stayed strong throughout her teenage years.

“As I got older, at 15, 16, I thought, ‘No matter what I do, I’m becoming a tennis coach because young girls need to see that it’s actually possible. It’s an option. If you don’t see it, you’ll never, ever consider it,” Henry says.

“That was my driving passion, to be able to pay it back into the community and provide that.”

In her early 20s and now a mum to two boys, Henry took the plunge and studied to become a Tennis Australia-accredited coach.

“My children were (age) three and one and when I look back on it, I don’t even know how I did it,” she says.

It was a massive commitment. A six-hour round-trip drive to Perth, she attended the state tennis centre for her accreditation. Henry would be away in the city for days at a time.

Support from her local tennis club and community meant everything.

“As a mum, if I didn’t have that support, I probably wouldn’t have been able to do it.”

Fast-forward to 2021, Henry is one of Western Australia’s leading regional tennis coaches, covering hundreds of square kilometres to bring tennis to country towns and rural communities.

“I live rurally, I support rurally,” Henry says. “I feel like I’m maybe helping bridge the gap between city and rural because I’m able to teach kids and adults just to love and laugh about tennis. It’s so important.”

In addition to club and individual coaching, Henry provides Cardio Tennis classes, which she says has increased club memberships, particularly in towns with declining populations.

“Our people are moving away to the coast,” Henry explains. The result is smaller communities and lower club membership.

“You get women and men who’ve never played tennis because they don’t know how to score, they don’t know where to stand; yet in Cardio Tennis you don’t need to know any of that, you just come along for fun,” Henry explains.

“That’s what it’s about, for me–showing clubs and people that you can be so socially connected and have a laugh with tennis.”

With the help of SunSmart Club Super Days Funding, clubs have been able to book Henry to come to their towns, sometimes specifically for Cardio Tennis.

“I sometimes drive 300-kilometre round trips,” she says. “It’s three hours just to do a Cardio Tennis session.”

As a result, memberships are increasing, Henry says.

“I travel to about eight to nine different clubs and it covers a lot of kilometres, but they’ve all found the same thing,” Henry explains. “People who wouldn’t come to play sets because there’s a bit of a barrier, will come to Cardio Tennis and have a laugh.

“Then they’ll stay on and they’ll have a nice barbecue and a dinner, and their kids will play and they’ll pay their membership because they love it.”

Inspiring people in the region with her passion for the game, Henry has also shown her community another kind of strength.

Three years ago, after experiencing chest pains and the sudden loss of her voice, Henry was eventually diagnosed with a rare type of aneurysm.

“I couldn’t speak. I couldn’t coach. Couldn’t do anything,” she explains. “It was very soul-destroying, but I had [to find] a new level of acceptance. I just had to ride through it and have faith that there was someone that could help, and there was.”

A surgeon in Sydney has been able to successfully treat Henry’s condition, but it requires her to travel across the country every six months and put tennis on hold.

“People are very understanding,” Henry says. “My community is aware of it and they support me and they help me.”

She credits her love of tennis for getting her through her treatment.

“Tennis is a lifeline, it really is,” she says. “When I’m over there having surgery, all I’m thinking about is getting up to fly home to get fit and get back on the court.”

It’s not just the sport itself that pulls her through, it’s the whole tennis community and microcosm formed around a club.

“I think when things in life go awry – personally for myself – there’s always tennis to fall back on,” Henry says.

“I think if anyone is going through anything and they’re needing support, tennis is brilliant.

“You’re part of a club, you’re supported. So you might go through some pretty harrowing life situations but you’ve always got your club and tennis to go back to. I’ve found that life-changing. Lifesaving, really.”