Behind the fun of their social media videos, coaches Nelson Parker and Reza Tompsett have a serious approach to delivering quality tennis experiences. 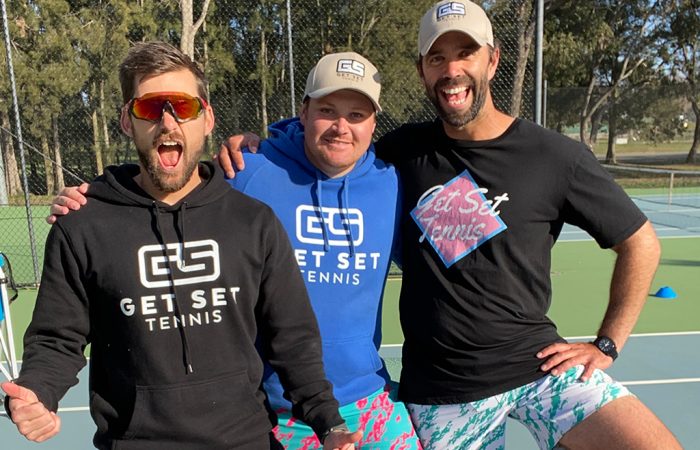 Get Set Tennis has been attracting attention beyond the capital’s suburbs of Kaleen and Amaroo thanks to social media. Posting cleverly devised, comical fitness drills and coaching methods seen on Instagram and YouTube, the coaching team is eager to share the fun approach of their club with fellow coaches as much as potential players.

Started by Nelson Parker in 2015, with Reza Tompsett joining him as fellow coach and co-owner a couple of years later, the pair had previously crossed paths while coaching in the United States before fatefully bumping into each other again once back home in the ACT.

“It was always a dream of mine to run a club,” Parker told us. “After a couple of years of running it and slowly building it, I convinced Rez to come on a crazy adventure with me. Over the last three years that we’ve been doing this thing together, it’s just continued to turn into something really special.”

Their approach to coaching puts a focus on enjoyment. “We try to make a fun culture and a family environment,” Parker explains. “The majority of our adult clients are parents of the kids that we teach. I don’t think many parents expected themselves to be playing tennis — they kind of just enrolled their kids, but then they’re like, ‘Oh, this looks fun for me too.’”

Delivering welcome boosts of happy hormones, here’s why tennis is not only good for your physical health but will also elevate your overall wellbeing #PlayTennis

These funny guys are more than tennis-court jesters. Their social media clips and skits may be entertaining, but they also show activities that Parker and the team put much thought into, taking time to explain the fitness benefits behind their mayhem.

“The more information we can get out to people, the more they might be encouraged to come and play tennis,” Parker says. “I love the idea that someone who might not be interested in tennis stumbled across one of our videos and maybe sees a tip about speed or agility or a fun game, and they look at it and go, ‘Oh, I might be able to do that.’ It just involves a lot more people.”

Parker adds that social media is something that other coaches and clubs shouldn’t sleep on. “I think that more and more tennis businesses and coaches are starting to get on that train, where they’re getting more involved with people on social media. I think anyone who’s not, they’re sort of missing out on really reaching out to a broader community,” Parker says.

“It’s not just something we slap together. We spend a lot of time on our social media, and it’s to try and connect with as many people as possible.”

We recently caught up with co-owners Parker and Tompsett to give some pointers to coaches and players alike, on and off the court.

Do you come up with the games we see on Instagram with social media in mind, or is it reflective of how the club operates?

But on top of that too, we also do a whole bunch of stuff that maybe is a little bit different and away from the coaching. We do little skits and little trending videos. And that’s more for the idea of making the community and the people who are involved in our little tennis family, making them feel, first of all, welcome and making them be part of the culture. And also, just sort of allowing people to be entertained and feel like you can come to our club and it’s not like a tennis factory. There are so many clubs out there that are just trying to pump out the next best  No. 1 player. We’re a little bit more wanting to make sure that when kids come and play tennis, that they’re going to enjoy it.

The personalities that we have on our social, that’s exactly who we are. So I kind of feel like it gives everyone who might want to be part of our community a good insight into who we really are as well — not just people who coach tennis.That’s the kind of vibe you get when you come to Get Set Tennis, as well.

REZA: On the coaching side of things, Nelson has a very good, strong belief [in sharing] the coaching ideas that we broadcast on social media … we want to share them. We want to share with the other coaches as well. Try this game, try this one out, this is really cool, this is an excellent idea. I think that’s something that’s very positive from the Get Set view, to share and keep it open.

Many coaches and clubs would like to get in on the social media scene but find it to be unfamiliar territory. How do you suggest they get started on social media?

NELSON: Don’t be so worried about putting anything out there that is polished. It doesn’t have to be perfect. As long as you’re going out there and sending out a positive message, you’re going to win no matter what. I would say, just start. Don’t overthink it. Keep it simple and keep it positive.

REZA: And keep it genuine. Nelson and I are fans of the cinema and the dramatic. If you’re not in that sort of category, you don’t have to be that. If you’re more instructional, be yourself and pass on your message. And I think that you’ve got to be genuine and true to yourself. Everyone’s got value, it’s just a matter of making sure that you bring it across in your own way.

What tips do you have for tennis newbies, who might be thinking about giving the game a go for the first time this summer?

REZA: Don’t be afraid to approach a coach and try some private sessions first to get a little bit of technique, and balance that with a good Cardio Tennis session. In my cardio classes, I have quite a mixture of levels, so we have some beginners and we have some players who actually have been playing for a while. And that’s a great mix, it’s a great understanding in Cardio Tennis because everyone’s there just to play and just to hit tennis balls and move.

And what about for people who have played in the past, maybe had a long absence from the court, and want to get back into it?

REZA: Try to find some other friends who want to do it as well. Maybe even take a beginner friend. The issue with that absence from the game, is that you have this really high expectation or memory of how you played. But the expectation, you’ve just got to lower it, and remember the purpose is to have fun, to engage — you’re being active and healthy.

NELSON: Just remember, you started it once. You did it once, you can do it again. There are people all over the world at all different levels who are playing this wonderful sport, so there’s no such thing as a bad tennis player. If you go out and you’re trying your best to be active, play tennis, play a game you can play for life, you’re already winning. Don’t stress too much about being the best player on the court. I would just say you’ll fall back in love with it pretty quick.

For more information, visit the Get Set Tennis website