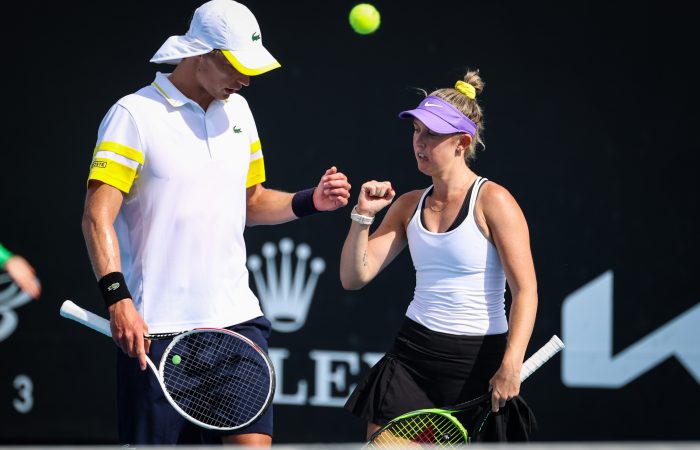 The wildcards are through to the mixed doubles semifinals, earning their place with a 4-6 7-5 [10-8] victory against fellow Australians Max Purcell and Arina Rodionova at Margaret Court Arena today.

“It was tough, it’s really good to get through,” Sanders said.

This is a career-best Grand Slam mixed doubles result for both 23-year-old Polmans and 26-year-old Sanders, bettering their quarterfinal run at Australian Open 2018.

It was a hard-fought battle, with Purcell and Rodionova bursting out of the blocks to break Polmans’ serve in the opening game of the match.

With the momentum in their favour, Purcell and Rodionova broke Sanders in the seventh game to stretch their advantage to 5-2. However, they struggled to close out the set.

They had two set points on Rodionova’s serve, but were unable to convert. Polmans saved another set point on his next service game, and a fourth set point was missed on Purcell’s serve. Purcell held his nerve though to hold and secure a 38-minute opening set.

Purcell and Rodionova struck again early in the second set, racing ahead 2-0. But Polmans and Sanders kept fighting, reeling off three consecutive games to wrest back the lead.

“After we lost the first set, we just found a way to make balls and be a bit more aggressive,” Sanders said.

Games then continued on serve until the 12th game, when Polmans and Sanders broke Rodionova to level the match.

In the deciding match tiebreak, it was Polmans and Sanders who made the better start. They built a 9-5 lead and closed out victory after 90 minutes on court.

“We’ve been playing together for the past four years, so Stormy and I know each other’s games quite well,” Polmans said. “It helps to get you through those pressure situations. A lot of points could have gone either way, so very happy to get through.”

It was their third victory this tournament in a match tiebreak.

“I think having the two match tiebreak matches in the past actually helped us today, because we had been in that situation before,” Sanders said.