Alex de Minaur dominates against Pablo Cuevas to surge into the Australian Open third round. 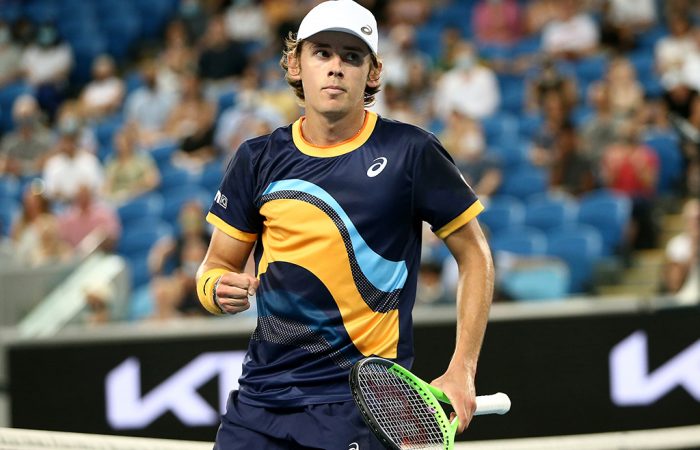 Alex de Minaur’s fourth Australian Open campaign is gathering pleasing momentum, the Australian through to the third round without the loss of a set.

After a swift win over Tennys Sandgren on Tuesday, the 21-year-old continued in the same fashion against Pablo Cuevas, recording a 6-3 6-3 7-5 win after one hour and 58 minutes on court.

“(I’m) very happy. It’s not an easy match to play,” said De Minaur of his first-time meeting with 35-year-old Cuevas.

“I felt like I went out there and I stuck to the game plan and was very focused throughout.”

Equalling his previous best showing of a third round appearance at the 2019 tournament, De Minaur’s progress is also helping to erase the difficult memories from last year.

After a stunning start to the 2020 season at the ATP Cup, the fast-rising Australian was forced to withdraw from his home Grand Slam with an abdominal tear.

“Look, it wasn’t easy last year, but I think I have used what I felt, you know, during all those stages last year to kind of fuel the hunger that I’ve got in the belly for this year around,” De Minaur said.

Determined to add more aggression in the 2020 season, De Minaur highlighted his intentions as he tested Cuevas with two break points in a six-minute opening game.

While he couldn’t convert on that occasion, De Minaur secured the 37-minute first set with breaks in the fifth floor and ninth games.

The second set unfolded in similar fashion, De Minaur managing his own service games easily and gaining another break over Cuevas in the sixth game. From there, he comfortably claimed a two-set lead.

Utilising his trademark speed superbly, De Minaur thrilled the Margaret Court Arena crowd with some dazzling winners – he recorded 28 in total, also claiming 25 of 29 entertaining points at the net.

The only opening that Cuevas managed was quickly obliterated, de Minaur clawing a service break back as the Uruguayan served for the third set. The Australian ran away with the last four games to close out the match.

“I’m very happy I managed to bounce back straightaway and not let it affect me and play some of my best tennis to turn it around and finish off in three sets,” he said.

“It’s a quality opponent. I mean, Fabio has been up there for a very long time. He’s back to playing his best tennis. He showed it at ATP Cup,” De Minaur noted of the 33-year-old.

“Look, it’s going to be a very tough one, but I’m happy to be in the third round.

“I’m happy to be back competing in the Australian Open in front of my home crowd, and I’m just going to enjoy every second of it.”