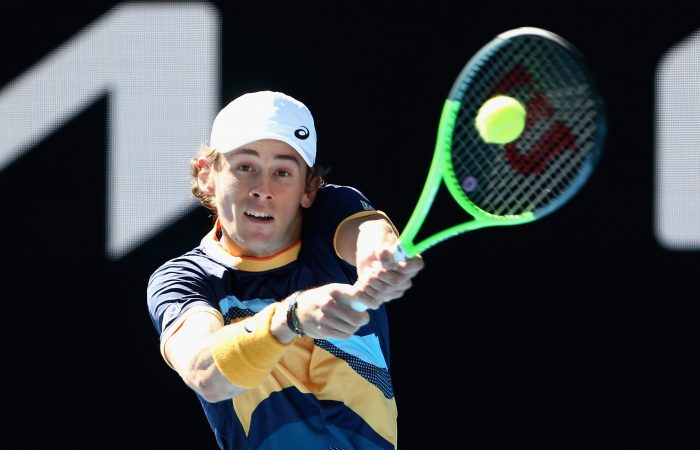 The No.21 seed recorded a 7-5 6-1 6-1 victory over American Tennys Sandgren at John Cain Arena this evening, subduing the two-time Australian Open quarterfinalist in one hour and 48 minutes.

World No.51 Sandgren entered this match with an imposing 4-1 win-loss record against seeded opponents at Melbourne Park. His only loss was to Roger Federer in last year’s quarterfinals, beaten in a five-set battle after holding seven match points.

But against De Minaur today, it was a different story.

The match was tight early, with only a single break in the opening set. It was De Minaur who struck first, breaking in the 12th game to take the set.

The 21-year-old Australian was dominating on his own service games, conceding only six points in the opening set and preventing Sandgren from building any rhythm.

“I was able to get through the first set nerves and loosen up a bit and play some of my best tennis,” De Minaur said.

An increasingly frustrated Sandgren had no answers against the world No.23, who signalled he’s one to watch this fortnight with a solid performance.

“It’s honestly amazing to be back here in Melbourne, playing in front of my home crowd. There’s nothing I love more and I’ve genuinely missed it,” said De Minaur, who finished the match with 27 winners and 19 unforced errors.

“I’m happy to be in the second round. Hopefully I can keep it going.”

De Minaur, who next plays world No.72 Pablo Cuevas from Uruguay, continues the impressive start for Australian men at this year’s tournament.

Eight Australians have advanced to the second round at this year’s Australian Open, with De Minaur joined by Nick Kyrgios, James Duckworth, Alexei Popyrin, Christopher O’Connell, Alex Bolt, Thanasi Kokkinakis and Bernard Tomic. It is the most Aussie men to reach this stage since 2003.

“Us Aussies, we always seem to play really well here in Australia. Now it’s time to kind of hopefully take this momentum with us and go conquer the world.”