Delighted to be competing at home in Australia, Ajla Tomljanovic meets Simona Halep in the Australian Open second round in a positive state of mind. 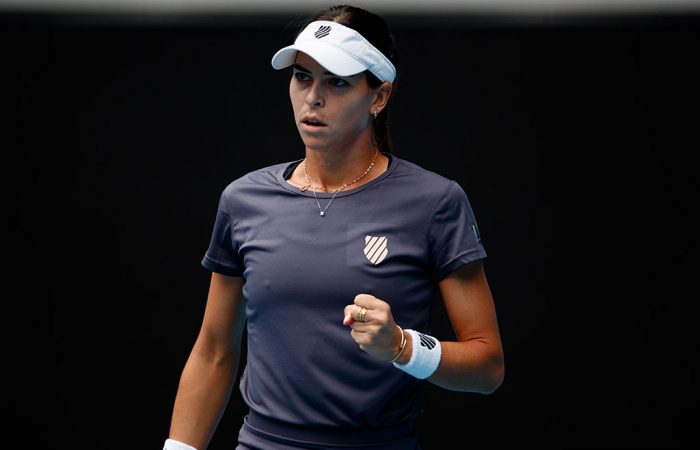 The second round of a Grand Slam is familiar territory for Ajla Tomljanovic. In 24 major appearances, the Queenslander has progressed this far, or better, on 11 occasions.

But the Tomljanovic who will tonight step on Margaret Court Arena to face world No.2 Simona Halep, says she’s not the same player of recent years.

“It’s actually a little different now. I feel like I’m in a different stage in my career,” she noted after dropping just three games in her AO 2021 opener.

“I cherish it more, but at the same time I still have that pressure that I put on myself.”

As passionate as ever at age 27, Tomljanovic is clearly aware of a potential timeframe.

“I think before – I wouldn’t say I took it for granted, but I took it more as a kid,” she admitted.

“Now I feel not that my time is limited, but I want to treat every tournament as a huge opportunity that can take me places.

“I definitely do think I’m a little bit not on the older side, but just a little more experienced and mature. I’m not 20 anymore.”

The perfect start for @Ajlatom 💪

She moves past Doi 6-2 6-1 in the opening round at @AustralianOpen 🇦🇺#GoAussies pic.twitter.com/XnVR28F1oJ

The challenges overcome in the last year have helped that changed mentality. Tomljanovic speaks freely of struggling at first with the uncertainty of pandemic-enforced shutdowns.

“(I) feel like a lot of things came crashing down just because it was so out of my control, and I didn’t know how to handle it,” she said.

Tomljanvoic could fortunately find support through key relationships. A tight-knit family unit includes father Ratko – also her coach – and mother Emina; her older sister Hana played tennis for the University of the Virginia.

She also has a helpful practice partner in boyfriend Matteo Berrettini, the world No.10 ATP player.

In an episode of Tennis United during 2020 lockdowns, Tomljanovic related the gruelling experience of practising with the big-hitting Italian.

“The thing is, he wants to get better too, and my arm is hurting by like the 40th minute because his forehand’s massive,” she said.

“(But) my dad’s telling me ‘no, no, no, you’re actually getting better’. It’s really hard to process that it is actually good for me.”

Also good for Tomljanovic in the past soul-searching period is the realisation of how well she’s managed difficult periods in her career.

“When I sometimes now look back on certain situations that I was in that were really tough.  At the time I kind of just went with the flow.  I look back now and I’m like, ‘wow, I overcame that pretty well’,” said the world No.72, who was sidelined for most of the 2016 season after shoulder surgery.

“I try to give myself a little more credit than I used to, because if I could change one thing in my path, in my career, is that I would be a little more positive with myself.  Not sure if it would have made a difference, but I definitely consciously try to do that now.”

Tomljanovic’s approach to a fourth tour-level meeting with Halep is a perfect example of that positivity. While she’s yet to secure a win over the two-time major champion, the Australian pushed her the full three-set distance in their first two matches.

“It’s always been close. I do feel like if I execute my game plan, I do have a chance,” said Tomljanovic.

“Tennis is so open now. Anything is possible. I think girls know that, even the top seeds … I do believe I can put myself n a really good position.”

Confidence is helped by some big wins earlier in her career, Tomljanovic most notably upsetting 2010 Francesca Schiavone and world No.3 Agnieszka Radwanska in a blazing run to the Roland Garros 2014 fourth round.

The Australian also has top-10 wins over Aryna Sabalenka and Kiki Bertens, both in 2019.

“It’s everything really,” she said of the confidence taken from those performances. “I just have that motto that if you can do it once, you can do it again. Even if you do it for five games, why not eventually for 12, 18, however long it takes.”

The prospect of more matches at that level is a scenario that the 27-year-old happily embraces – especially here in Australia.

Asked how it felt to be back in Melbourne, a smiling Tomljanovic responded: “A little surreal actually. Just living normally, I think it’s the only place in the world where we can do that.

“I went for a dinner on Saturday. I was walking along the river on Southbank. I thought to myself, ‘wow, this is incredible’.

“We’re just so fortunate to be here in this country, let alone play the Slam … I’m just really hoping I get as many wins as possible here to keep it going.”

> PREVIEW: No Place for Impossible on Day 3 of Australian Open 2021