After missing AO 2020 with injury, Alex de Minaur returns to his home Grand Slam determined to build on the many milestones he's already amassed. 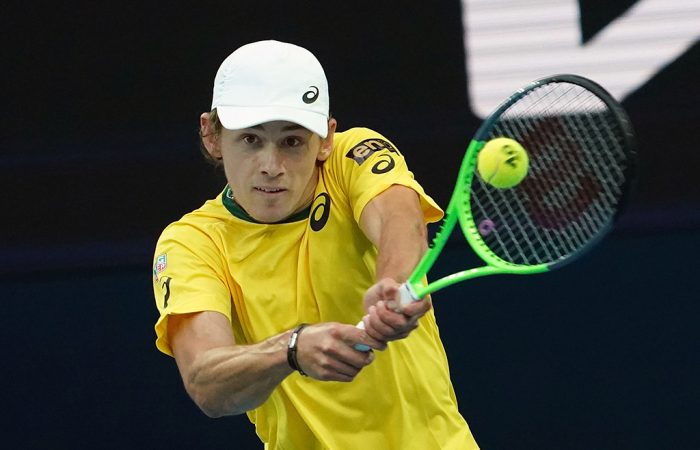 He’s a four-time ATP singles champion, a Grand Slam quarterfinalist and at world No.23, the current No.1 male player for Australia.

At just 21, Alex de Minaur has already amassed quite the tennis record.

But while many of his age group would covet those milestones, the determined young competitor is far from satisfied.

Having first picked up a racquet as a four-year-old, De Minaur considers himself a careful work in progress.

“I know what I’ve got to work on. I’ll put the hours in on the court till I get there,” the Australian related to media in Melbourne.

“I strongly believe I’ll never get to the point where I’m satisfied with myself or my game. That’s just giving myself fire in my belly.”

That’s especially true at Melbourne Park this fortnight, the Australian Open a burning gap on an otherwise bright period after an abdominal injury forced his withdrawal from the 2020 tournament.

“I’m really excited. I mean, it was a very tough time last year, having to come out here and say that I was pulling out of my home Slam,” said De Minaur.

“I’m very happy to be back here. Feeling great, happy, in great shape. I’m really looking forward to coming out and playing my best tennis in front of my home fans.”

He’s also happy with momentum, De Minaur having already lifted his first trophy of 2021 after starting his season in Antalya.

The Australian upset the higher-ranked David Goffin in the semifinals, and was leading Alexander Bublik in the final when the Kazakhstani retired with injury.

There were also gains to take from a second straight appearance in the ATP Cup, despite losses to Roberto Bautista Agut and Stefanos Tsitsipas.

“I’m very happy. I mean, I was able to get matches in Antalya first or second week of the year. I feel like I’ve had a lot of matches,” he said. “Now it’s just about kind of freshening up … be ready to play.

“I mean, I’m hitting the ball great. Body’s good. It’s just now putting a couple things together and smoothing that out.”

Those subtle improvements are a constant for De Minaur, the Australian reasoning “that’s basically what my whole career has been.”

Asked about his serve, regarded by some as one of the few vulnerabilities in his game, De Minaur is pragmatic.

“I’m going to keep on improving bit by bit,” he related. “I don’t have I guess the stature to just come down and drop bombs – which I wish I could, trust me.”

Still, with wins over the likes of Alexander Zverev, Grigor Dimitrov and Karen Khachanov on his recent record – the latter delivering that first major quarterfinal appearance at the 2020 US Open – De Minaur is hardly panicking.

He credits a dual upbringing – between his home town of Sydney and Spanish base of Alicante – for shaping his tennis.

More recently, the challenge of navigating life amid the pandemic contributed to his development as both a player and a person.

“I believe this last year has given a lot of people a lot of time especially to learn about themselves. I’ve learned different aspects of myself, how I like to enjoy different things outside the tennis court,” he said.

“I learned to have to deal with circumstances and adapt a little bit better. Definitely from now on I won’t take for granted being able to move around at a tournament or do stuff.

“That’s something that, if we’re allowed, I’ll make a lot more use of – see(ing) different places, different cities, not kind of stick to the hotel room and the courts.

“It’s given me an appreciation for life. My family, my friends, the people around me that we’ve all kind of gone through tough times, and now hopefully we can push this all around and enjoy life again.”

For now, however, the focus is all on tennis as De Minaur takes to the court for only his fourth appearance in an Australian Open main draw.

“It’s been a long year coming,” he smiled. “I’m definitely ready to go.”