Australia’s Alexei Popyrin is determined to continue his winning run at this week’s Melbourne Summer Series. 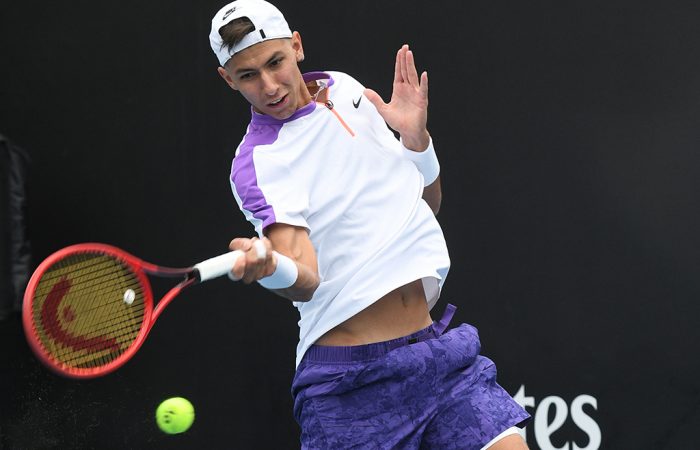 The 21-year-old Australian saved six match points in his opening round at this week’s Murray River Open. He then eliminated 15th seed Tommy Paul to set up a third-round showdown with second seed Grigor Dimitrov.

It is a welcome confidence boost for the world No.114 after a testing 2020 season. Popyrin did not win a tour-level main draw match after last year’s Australian summer and consequently fell outside the world’s top 100.

“Last year wasn’t really the best year for me,” Popyrin admitted. “It was a difficult year for everybody. But I just want to perform better than last year. I want to get a couple wins under my belt here in Australia and then hopefully I can continue that form throughout the year.”

Popyrin, who achieved a career-high ranking of No.87 in July 2019, spent his preseason at the Mouratoglou Academy in Nice, France.

“I spent my first four weeks there focusing mainly on fitness and on the physical aspect of my game, which I think improved dramatically over this off season,” he said. “I’m feeling in my best shape, feeling really, really good.”

Popyrin then completed a two-week training block in Dubai, before travelling to Melbourne to quarantine with other Australian Open main draw competitors.

Set to make his fourth Australian Open appearance, the 196-centimetre talent has fond memories at Melbourne Park. He has twice advanced to the AO third round, in 2019 and 2020.

“The last two years have been really special for me in Australia, tennis-wise,” Popyrin said.

“I’ve always brought my A game to the Aussie Open and I think the crowd really helps that. The home crowd and obviously playing at home where I grew up plays a big part too.”

For the Europe-based Popyrin, the Aussie summer also provides an opportunity to reunite with his  Australia-based older sister.

“I just love to spend time with my sister whenever I’m back,” he said, noting this year is extra special as his sister is pregnant.

As he relishes the opportunity to compete at Melbourne Park on the eve of the season’s first Grand Slam, Popyrin is also looking to snap a seven-match losing streak against top 20-ranked opponents when he plays world No.19 Dimitrov at Court 3 today.

“I think I’m a better player than I was last year, especially after the preseason,” a quietly-confident Popyrin said.

“I think the level for myself is only going to get higher and hopefully the results will come.”