Nick Kyrgios moves into the third round of the Murray River Open with a win over friend and former training partner Harry Bourchier. 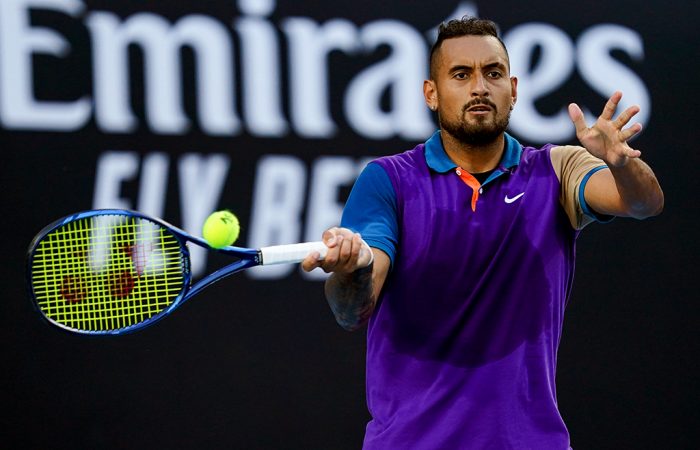 When the Nick Kyrgios entertainment package lights up a tennis arena – combining the power with trickery and his own on-court commentary – there are many observers who’d love the show not to stop.

Harry Bourchier, playing a first ATP-level match against his former training partner in the second round of the Murray River Open, did his best to make it last.

While the world No.325 was initially overwhelmed as he dropped a 28-minute first set to Kyrgios, the Tasmanian gradually found a groove.

“I thought that the level he brought in the second set was very high,” Kyrgios related. “He was serving really, really well and he started getting on to a couple of my serves.”

As he extended the second set to a tiebreak, Bourchier held three set points but was unable to convert them.

“That’s the tennis that I knew it was going to come to in one of the sets, where he was going to raise his level. He’s a good player. I wasn’t surprised at all by some of the shots he was hitting or how he was serving. He’s extremely athletic for his size as well.

“I’m actually pretty happy with the way I played today.”

The match may have ended sooner, if not for an earlier break in play.

Serving at 5-5, the world No.47 from Canberra received a time violation. Arguing that he’d already started his service motion, Kyrgios demanded the ATP supervisor be brought on court.

The match soon continued, the Australian relating that “I just wanted to pay by the rules.”

Kyrgios set up a third-round encounter with world No.25 Borna Coric, whom he has beaten twice in their four matches.

“(He’s a) great player,” said Kyrgios. “Amazing player. Super solid and he’s been at the top of the sport now for the last couple of years. He’s been playing great tennis.”

But two matches after a long break from tennis, the Australian is also feeling ready, despite an injury scare in the Murray River Open first round.

“I know how to win matches and I definitely feel at home playing the Aus Open,” he said. “I love it here, it’s one of my favourite tournaments of the year.”