Energised from time spent at home during the disrupted 2020 season, spirits are high as world No.1 Ash Barty launches her long-awaited comeback this summer. 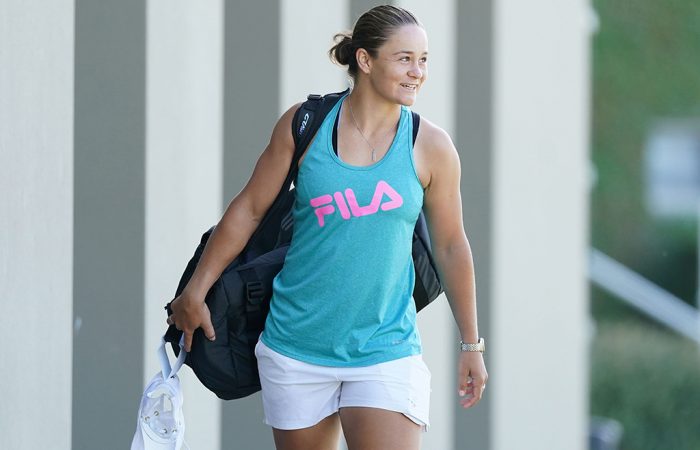 Spirits are high as Ash Barty hits the practice courts in Melbourne.

The world No.1 warms up by kicking the footy, jokes with her team and smiles often as she exchanges groundstrokes with fellow Queenslander Lizette Cabrera.

“It feels like summer,” says Barty soon after walking off the court. “I love it here.”

Some 12 months after she first lifted a WTA trophy on home soil in Adelaide then stormed to a maiden Australian Open semifinal, Barty could be talking about her tennis or referencing the city.

Either way, she’s delighted to be back.

“I’m really excited to be back down here and it’s been a long time for me now, in between competitive matches,” Barty enthuses. “But I’m really, really pumped.”

It’s a mindset that’s helped by the fact that Barty – a Doha semifinalist in the only non-Australian tournament she contested in the disrupted 2020 season – relished every minute of an extended period at home last year.

Asked to describe that year in a single world, “bizarre” is the best one a smiling Barty can find.

As down-to-earth as always, the Queenslander is acknowledging that amid the many professional challenges created by the pandemic, some special memories were also created.

“It was bizarre in a sense that there were a lot of things for me personally, that I got out of the year and I felt like I developed a lot as a person,” she relates.

“I got to spend a lot of time with my family but professionally there was obviously a big question mark and almost a big void in that way.”

The 24-year-old had chosen not to travel when the international tour resumed last August, surrendering the opportunity to contest Roland Garros, where she’d made her Grand Slam breakthrough in a career-best 2019 season.

Still, that absence was for the best possible reason.

“At the end of the day they all came down to a very easy decision in a sense of prioritising the health of my team, my family – probably more so before myself,” she says.

“I would never be able to forgive myself if something happened to us when we were on the road.”

Fortunately, there were many valuable ways for Barty to use her time off tour.

In May, the world No.1 visit the Royal Brisbane and Women’s Hospital with Pat Rafter, where the popular locals showed their appreciation for frontline healthcare workers in the COVID-19 pandemic.

She later joined John Millman, Cabrera and John-Patrick Smith in Far North Queensland, where the players visited the Edge Hill State school, promoted the safe return of tennis and helped launch the new roof at the Cairns International Tennis Centre.

And late in 2020, she helped year 12 students at the Bomaderry High School in New South Wales, finish their year on a high.

Barty had been moved by a letter received from a student in the bushfire and flood-affected community, requesting a video call as a gift to their teacher – the world No.1 instead made a surprise visit in person.

The importance of community connection, says Barty, has been clear since childhood.

“I think it’s been a massive part of my life growing up. It’s part of the values that Mum and Dad taught us is about that support network, within your community and with your respect and all those things that you do.”

“I think all those little things made the year go a lot quicker for me. I know for a lot of people around the world, and particularly around Australia, it was more challenging times with lockdowns and those sorts of things,” she shares.

“But I think as human beings, we had to grow from that. We had to adapt, we had to find ways to keep ourselves stimulated, entertained and I think that you saw a lot of people grow a lot stronger from that period.”

For Barty, there was also strength to be drawn from a rare winter in Brisbane.

“I’ve always been very much a homebody and I know that I recharge and I get my energy source from my family at home,” she explains.

“In a sense it’s been a massive, massive hit of that. A massive time where I could appreciate all the things that I have at home and also appreciate that for me to be happy, it doesn’t take a lot.”

Preparing to make her eighth appearance in her home Grand Slam, it’s tennis that now has Barty’s full attention.

“So I’m excited to do that over the next month.”

Barty’s summer of tennis begins tomorrow at A Day at the Drive in Adelaide, where she’ll face world No.2 Simona Halep.

“Sim’ is someone I keep in close contact with throughout the whole year, so it’s going to be nice to play her again, to kind of wet my feet a little bit and just get back in the ring. Just get back and try out a few things, prepare as best that I can.”

Lifting her eighth WTA trophy at the inaugural Adelaide International last year, it’s clearly a bonus to return to a successful setting.

The memories of her semifinal run at AO 2020, where the top seed exited in two hard-fought sets to eventual champion Sofia Kenin, are equally important.

“(They’re) some of my favourites and some of my most heartbreaking ones as well, but I think it was a hell of a fortnight for me, even leading up from Adelaide and Brisbane,” reflects Barty.

“Memories from the whole summer that were obviously getting me ready for the whole year. I felt like I played a great level and every time you fall you get back up and try again.

“For me, it’s about going out again this time and starting from scratch. Starting from the first round and trying to do the best that I can.”