Fuelled by the special memories he’s already made in Melbourne, Thanasi Kokkinakis is embracing the opportunity to make a fresh start at AO 2021. 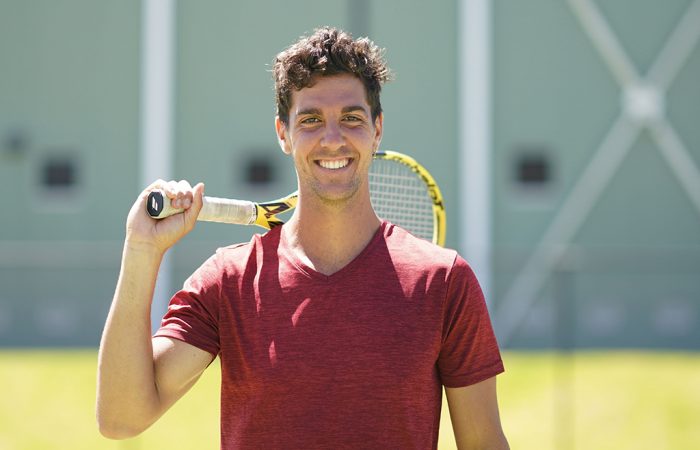 Few players appreciate the significance of competing in Melbourne more than Thanasi Kokkinakis.

Images of the jubilant 18-year-old circling Court 3 to celebrate with fans after a marathon upset of Ernest Gulbis at Australian Open 2015 – the then world No.247 outclassing No.13 Gulbis 8-6 in the fifth set – are seared into the memory bank of his many supporters.

But nobody has better memories of that career-defining victory than Kokkinakis himself.

“Those are the reasons why you play,” the South Australian smiled during a recent break in practice.

“Court 3 has been a great court for me, win or lose the crowd there has been unbelievable.

“For me it’s the best tournament in the world and there’s nothing like it.”

It was matches like those that fuelled Kokkinakis as he overcame numerous setbacks in the years following.

Late in 2015, he underwent right shoulder surgery and with an abdominal strain also factoring, he played just one ATP match until midway through the 2017 season.

The highs and lows continued for Kokkinakis, who returned to stun Milos Raonic at Queen’s in 2017 and was a winner over then world No.1 Roger Federer at the 2018 Miami Masters.

But suffering a serious bout of glandular fever, Kokkinakis was unable to contest any events when the 2020 season started.

There’s understandable excitement, then, as the 24-year-old once again prepares to contest his home Grand Slam.

“Just having that atmosphere and that crowd. I’ve always seemed to play some good tennis there, so I can’t wait,” related Kokkinakis, a wildcard recipient who takes hard-earned perspective into a fifth main draw Australian Open appearance.

While the unusual circumstances of the season-first Grand Slam – delayed due to the pandemic and with strict safety protocols already implemented – create a challenge for many players, Kokkinakis instead recognises a unique opportunity.

“I’ve been in this situation where I’ve had to have a layoff many, many times, so I’m kind of used to it to an extent. I feel that I know how to deal with it and I’m just looking forward to getting started.”

Kokkinakis will do so knowing he’s done everything possible to deliver a quality performance.

After recovering from the illness that delayed his start to the 2020 season, Kokkinakis spent time training in Melbourne with two-time major finalist Mark Philippoussis.

“It was tough because I couldn’t get my coaches from Adelaide over,” explained the South Australian, who claimed two UTR Pro Tennis Series titles while the international tours were disrupted due to the COVID-19 pandemic.

“Mark’s been really good to use as a little bit of a mentor and just hitting some balls and talking with him. He’s just a really good guy that’s liked helping me out where he can.”

There are also recent training blocks in Brisbane, providing both quality hitting partners and valuable conditions.

“(I was) trying to mix it up and stay engaged. The practice has been good,” said Kokkinakis. “Obviously Brisbane’s really good with the weather and humidity to get yourself physically prepared … It’s been good, the preparation’s been really good.”

So too is the outlook, with Kokkinakis excited to complement his singles campaign with a doubles appearance alongside Nick Kyrgios.

There’s already a strong shared history between the close friends, who contested the Australian Open 2013 boys’ singles final (Kyrgios emerging the winner) and teamed to win the Wimbledon boys’ doubles that season.

Kokkinakis is delighted to reignite that partnership for a third time at Australian Open 2021, especially given their close friendship.

“Some players obviously you’re closer with than others but Nick’s probably the closest one that I speak to,” he related.

“We speak probably every day or two. Not even about tennis, usually about just random stupid stuff on social media but that’s how we talk. Our communication goes a long way back and our relationship,

“I can’t wait to get out and play some doubles with him.”

The link to Melbourne is equally strong, Kokkinakis knowing that both players and fans have been granted a special opportunity in a unique Australian Open.

“I’m super stoked (to be back in Melbourne). I love this city. It’s been a rough year, especially for Melburnians but hopefully this Aussie Open can be a bit of joy to them for a tough year,” he said.

“It’s unreal being back out there with that crowd. Hopefully the energy’s the same as it has been for the last few years.”

As he steps on court for the 2021 instalment, Kokkinakis can equally appreciate the value of embracing the moment.

“I think just to be resilient and to just stay in the moment,” he said of the lessons learned in recent seasons.

“You never know what can happen and things change really quick. You’ve just got to kind of live in the present and make the best of the situation.”