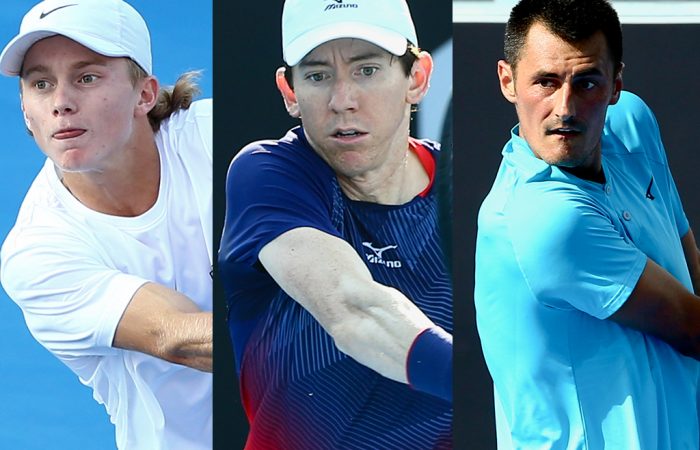 There are three Aussie players left in Australian Open 2021 qualifying.

Bernard Tomic, along with wildcards Dane Sweeny and John-Patrick Smith, have advanced to the final round in the men’s singles qualifying draw in Doha.

They’ll compete for a coveted place in the AO 2021 main draw today – and at least one Australian is guaranteed to qualify, with Tomic and Smith going head-to-head in an all-Aussie battle.

The last time two Aussie men faced-off in the final round of Australian Open qualifying was in 1992, when a 19-year-old Patrick Rafter defeated Mahyar Goodarz to earn his Grand Slam debut.

[WC] Dane Sweeny (AUS) v Sergiy Stakhovsky (UKR)
Doha, Court 1, first match (starts at 6.30pm AEDT)
While Sweeny has his sights set on qualifying for his first Grand Slam tournament, his next opponent is hoping to make his 36th major main draw appearance. Stakhovsky, who is currently ranked No.201, owns a career-high ranking of No.31 and is a member of an elite group in tennis – as one of the few to defeat Roger Federer on Wimbledon’s famed Centre Court. Their differences in experience are stark, but Sweeny is happy to embrace his underdog status in this final qualifying round. Recognising the opportunity he has, the 19-year-old wildcard from Brisbane is not intimidated. “I’m really happy with how I’ve done, but it doesn’t mean I’m here to lose,” said Sweeny, who is competing in Grand Slam qualifying for the first time in his career. “I’m going to try to qualify.” The world No.794 says earning a place in the AO 2021 main draw would be a dream come true. “I’d be over the moon,” he said.

[WC] John-Patrick Smith (AUS) v Bernard Tomic (AUS)
Doha, Court 2, third match
A new career-first beckons for one of these Aussie men, who are both attempting to qualify for the Australian Open for a first time. Smith has twice lost in the final qualifying round, while Tomic has experienced that pain once. “It’d be huge, I’m telling you. It would be the best feeling,” No.315-ranked Smith says of what qualifying would mean. There will be no secrets when these two Queenslanders take to the court. “I’ve been eating dinner with Bernie like every day here, we flew on the same flight,” Smith says. “I’ve known him for years. So it’s been really good fun to hang out with him a bit.” The 31-year-old Smith expects a big test. “It’s Bernie, it’s gonna be a tough match. (I’ll) just go out there, just play and do the best I can.” Tomic described the match-up as “uncomfortable”, acknowledging Smith won their only previous tour meeting in 2015. “JP can play and he’s playing really well,” Tomic says. But the world No.228 has impressed himself with his own fortitude this week. “I’m fighting well,” he said after saving a match point in his second-round win. “I’m still in the draw, (so) I’ve got to give myself a chance.”