In our Flashback Friday series, we celebrate the 20th anniversary of Todd Woodbridge and Mark Woodforde’s 2000 triumph at Roland Garros. 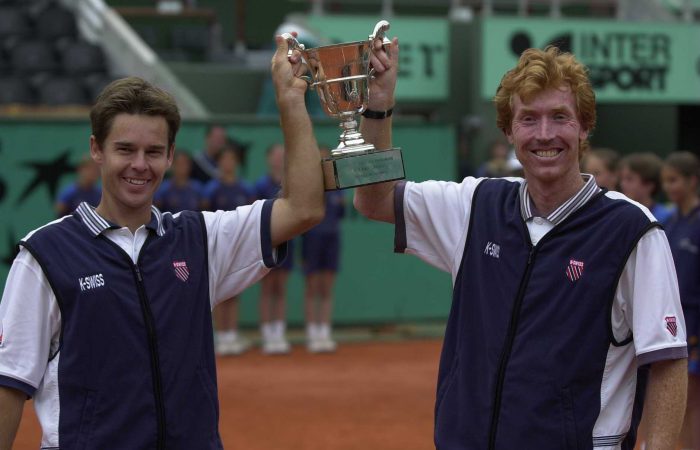 Australian duo Todd Woodbridge and Mark Woodforde created history at Roland Garros in 2000, becoming only the second men’s doubles team in the Open era to achieve a career Grand Slam.

Success at the clay-court Grand Slam had previously eluded the Woodies, with a 1997 finals run their best result from nine previous appearances.

However, the stars finally aligned in Paris for the much-loved Aussie team in 2000.

As the second seeds they dropped only two sets throughout the tournament, securing the title with a 7-6(7) 6-4 victory against fellow Australian Sandon Stolle and the Netherlands’ Paul Haarhuis in the final.

This Paris breakthrough was extra special, as Woodforde planned to retire at season-end. It meant this was their final chance to complete a career Grand Slam.

Seems like yesterday! We never thought we would get the French, it was our last chance Mark was retiring at the of the year, we saved match point in the 1/4’s to Novak/Rikl … https://t.co/V6X3eZxzEk

In achieving the feat, they joined an illustrious list of champions:

American twins Bob and Mike Bryan have since completed a career Grand Slam (in 2006), as have French combination Pierre-Hugues Herbert and Nicolas Mahut (in 2019).

The Woodies finished their partnership with 61 doubles titles, including 11 Grand Slams and one Olympic gold medal. Only two men’s doubles teams in history have won more Grand Slam titles – Mike and Bob Bryan with 16, and Australia’s Tony Roche and John Newcombe with 12.