Aussies in action: Thompson to play Millman in Kitzbuhel

Twelve Australians are competing in clay tournaments in Europe this week. 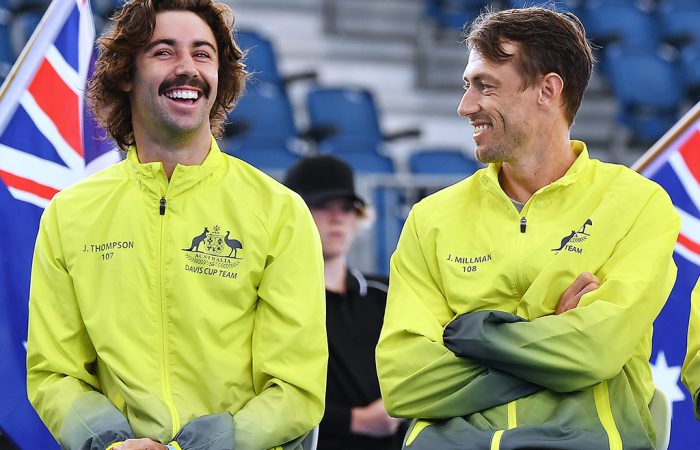 As Alex de Minaur continues his career-best Grand Slam run in New York, many Australian players are competing on clay in Europe this week.

Kitzbuhel in Austria is the first stop on the ATP Tour’s rescheduled clay court swing, which culminates with Roland Garros later this month.

The two Australians in the men’s singles draw – John Millman and Jordan Thompson – play each other in the opening round. Millman has won both of his previous matches against his Davis Cup team-mate, who just made his first major fourth round in New York.

Max Purcell and Luke Saville lost in men’s singles qualifying overnight and now turn their attention to doubles. Purcell almost scored one of the biggest wins of his career in the opening round of singles qualifying, extending No.89-ranked Italian Andreas Seppi to three sets.

Ellen Perez won an all-Aussie clash in the first round of singles qualifying of a WTA tournament in Istanbul last night, defeating Arina Rodionova 7-6(4) 7-6(7).

The 24-year-old Perez, who will also play doubles with Storm Sanders this week, now faces Brit Harriet Dart in the final qualifying round.

Christopher O’Connell, fresh from his Grand Slam breakthrough at the US Open, is also competing in Aix en Provence this week.

Marc Polmans and Aleksandar Vukic have made winning starts at an ATP Challenger in the Czech Republic.

The No.121-ranked Polmans recorded a 6-1 6-4 against Belgian Kimmer Coppejans in the Prostejov opening round, while qualifier Vukic fired 18 aces in a 6-4 6-3 victory over Switzerland’s Henri Laaksonen.

Alex Bolt, playing his first professional tournament since February, lost to Slovakian Martin Klizan 6-3 6-3 in the first round.