Australian Alex de Minaur is ready for a US Open fourth-round showdown against Canada's Vasek Pospisil. 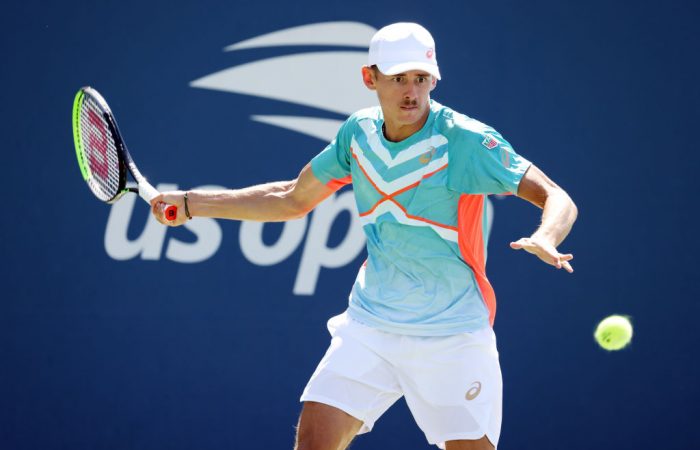 Alex de Minaur is one win away from advancing to his first Grand Slam quarterfinal.

Standing in the 21-year-old Australian’s way is Canadian Vasek Pospisil.

“It’s going to be a tough one,” De Minaur said ahead of their match at Louis Armstrong Stadium on day eight.

“We’re in the fourth round of the US Open, so happy to be there and ready for the battle – that’s for sure.”

The world No.94-ranked Pospisil underwent back surgery last year. His ranking had dipped to No.248 in October, however five top-20 wins so far this season have helped him quickly charge back inside the world’s top 100.

Pospisil has defeated three higher-ranked opponents so far in a career-best US Open run. This includes a four-set win over No.18-ranked compatriot Milos Raonic in the second round and a five-set victory against world No.11 Roberto Bautista Agut in the third round.

“Even though Vasek isn’t a seed, he’s definitely playing like a top seed,” De Minaur noted of the Canadian, who has a career-high ranking of No.25.

“He’s taken out both Milos and Bautista. He definitely deserves to be there. He’s a very, very dangerous player.”

De Minaur, who scored a five-set win over world No.16 Karen Khachanov in the third round, is anticipating a tough match.

“He’s obviously a very aggressive player,” the No.21 seed said of Pospisil.

“He’s going to look to dictate a lot and try to take the net. I’ve just got to make sure I keep my depth, try not to get pushed around.

“(I’ll) try to stand my ground and hopefully dictate myself.”

[21] Alex de Minaur (AUS) v Vasek Pospisil (CAN)
Men’s singles, fourth round, Louis Armstrong Stadium, first match (1am AEST start)
This is the third career meeting between world No.28-ranked Alex de Minaur and Vasek Pospisil. The Australian has won their two previous matches, both on hard courts in 2018. Both players are seeking to reach their first US Open quarterfinal. De Minaur has matched last year’s career-best fourth round run in New York, while the 30-year-old Pospisil had never previously progressed beyond the second round at this tournament. The Canadian has made a major quarterfinal once before, at Wimbledon in 2015.

> Take a look at the full US Open day eight schedule