In our Flashback Friday series, we look back at Sam Stosur’s US Open victory in 2011. 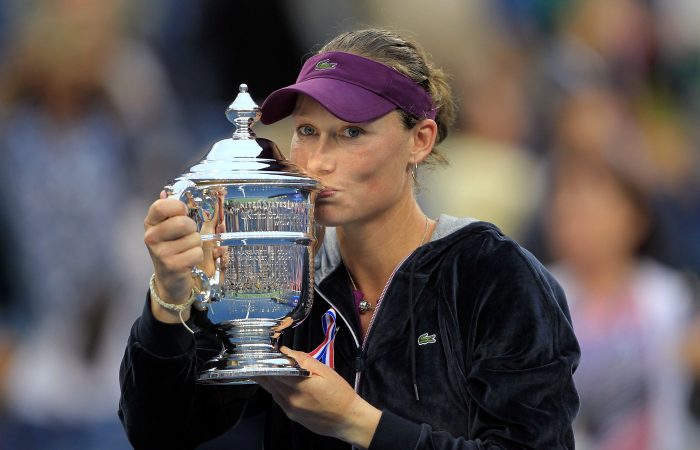 With a thumping forehand return winner, Sam Stosur sealed the biggest win of her career and became a Grand Slam singles champion.

That particular point, which was Stosur’s third championship point against Serena Williams in the US Open 2011 final, was symbolic of the Australian’s performance in that match – measured and untouchable.

“I can still see that very clearly, that point and that particular shot,” Stosur recalled.

“I hit that shot, I don’t know, 20 or 30 times during that match. So there was absolutely no doubt in my mind on that match point, if I had a second serve, that’s what I was doing.”

Stosur won 6-2 6-3 in 73 minutes. The ninth-seeded Australian hit 22 winners in the final, including 15 in the second set. Her aggressive game left Williams frustrated and snapped the 18-match winning streak the American had built in reaching the final.

“As soon as I found myself in that final, I had no doubt that I could win,” said Stosur, undaunted by Serena’s 13-3 win-loss record in Grand Slam finals entering the match.

“I essentially said it to my team the night before when we got back to the hotel, something just clicked in me where I knew that I could do it.

“I wish I could go into every single match and every single tournament thinking that, but it happened in the biggest and the best moment so I’ll take that one time.”

With her victory, Stosur became the first Australian woman to win a Grand Slam singles title since Evonne Goolagong Cawley at Wimbledon in 1980 and first US Open champion since Margaret Court in 1973.

“I didn’t start playing to break records or anything like that. My goal and dream since I started was to win a Grand Slam,” Stosur said.

“To actually do it, it’s unbelievable. Being Australian with that great history and now to break that drought is obviously very special.”

Reflecting on the final, Stosur revealed she is proud of the self-belief she showed.

“Absolutely I was nervous with two match points (gone),” Stosur remembered of her winning championship point.

“So to know that that’s what I want to do, and really back myself with that, made me very proud of myself.”

She rates it one of her best ever matches.

“I’ve played matches where I feel like I played lights out, can’t miss a ball, and, you know, it’s fantastic,” she admitted.

“But to do it under these circumstances, in this kind of final against a player like Serena, for sure I think it’s one of the best days of my career, of my life.”