The UTR Pro Tennis Series is proving a hit with participants, who are thrilled to be back on court playing professional events in Australia. 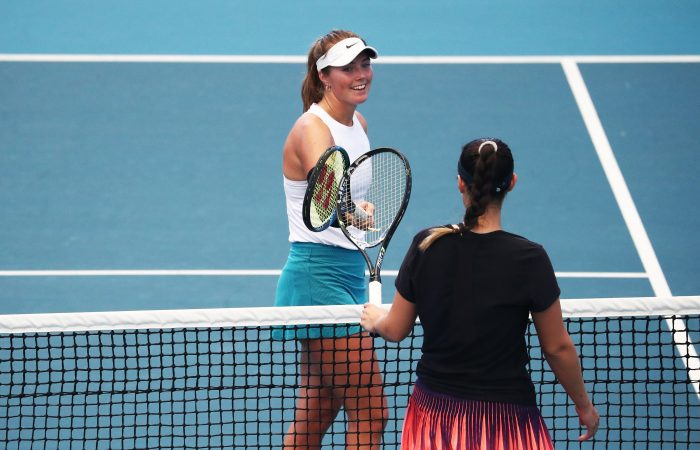 Ellen Perez and John-Patrick Smith might not be competing at Wimbledon this week as originally planned – but for the top 100-ranked doubles players, there is still reason to be excited.

Both are competing in the UTR Pro Tennis Series, the first professional event played in Australia since the COVID-19 pandemic shutdown the sport across the world. It features strict biosecurity protocols to keep participants safe.

Perez, the current world No.41 in doubles and No.247 in singles, has advanced to today’s Sydney final.

“It’s definitely exciting. I think it’s nice to have a plan again and be training for something,” Perez said of her return.

The 24-year-old, who has a UTR of 12.04, won both of her round-robin matches to set up a final showdown against Alexandra Bozovic.

“I’m definitely rusty. I feel like I started every match a little bit slow – but yeah definitely it’s nice to try and work things out and improve over the match,” Perez said of her form in her first singles tournament since February.

Smith, currently ranked No.91 in doubles and No.290 in singles, is competing in Brisbane this week. The 31-year-old, who has a UTR of 14.81, has defeated Calum Puttergill and Alexander Crnokrak so far in round-robin matches.

“It was good fun to get out there and actually compete again,” said Smith, who has spent the past few months in Townsville.

The 18-year-old, who has a UTR of 10.77, admits it has been hard to maintain motivation while professional tennis was suspended.

“I went through periods where I thought like ‘what’s the point’, but in the end I thought if I’m training, then I’m going a step forward,” she said.

Gadecki posted a 6-3 6-0 win over Sara Tomic in round-robin action in Brisbane yesterday.

“To be honest, I can’t even begin to describe how good it is to be back out there – especially playing and competing,” Gadecki said.

“It’s been really hard being able to train without really knowing what’s next. So just like even being a week out from this tournament, it really motivated me and fired me up to train good.”

Despite her loss, the 22-year-old Tomic also took positives out of her return to competition.

“It was so nice to be out there to play. This COVID has been really difficult for a lot of players,” said Tomic, who has a UTR of 11.48.

“I’m really happy and grateful that Tennis Australia and all the other teams, the UTR and the federation have been able to make this happen.”