World No.43 John Millman reflects on his childhood development in a HomeCourtTennis online discussion. 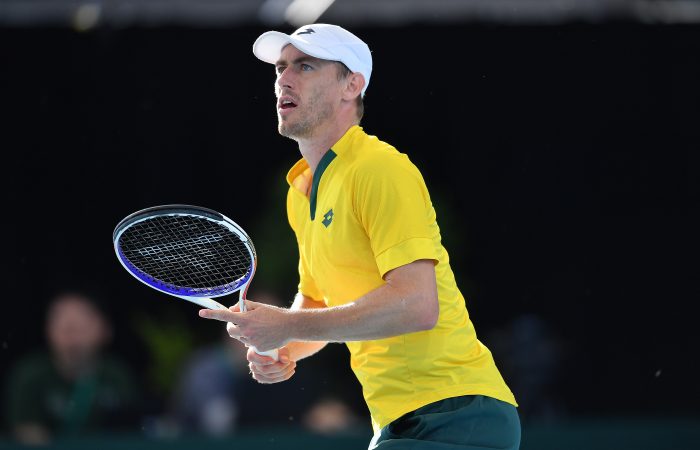 As Australians get more creative with how they play tennis at home, John Millman has shared some of his own childhood memories.

The world No.43 was a special guest for a HomeCourtTennis discussion on a Tennis Australia Facebook Live last night.

Millman recalled his mother, a physical education teacher, setting up around-the-home tasks to develop his motor skills from an early age.

“She was a very active person and encouraged us to be outside,” he said.

Millman explained how he began playing a form of tennis as a three-year-old, using old stockings on a swinging Hills Hoist clothesline.

“Mum would hang up stockings on the clothes line and in the stockings would be scrunched up balls of newspaper. She’d also cover a clothes hanger in a stocking, so you’d have a little stocking racquet to hit the hanging stockings with,” he said.

Playing tennis with balloons is also another fond memory for the Australian Davis Cup representative.

“From a young age, I really enjoyed challenges. It was something that really motivated me,” Millman said.

During his primary schooling years, Millman recalled rushing home each day to use a ball machine on the family’s tennis court. He would push the heavy machine down a hill to the court and set up six extension cords to get power from their house.

“I’d go out there at 3.30pm after school and just hit balls for hours with no one on the court with me,” Millman said.

Millman admitted the repetition of grinding from the baseline during this activity played a major part in his development.

“You can see how that’s influenced my game style today,” he said.

“I probably should have spent a bit more time at the net.”

When the discussion steered to the importance of personal development as well as technical skills, Millman shared more of his own experiences.

Admitting he was a ‘big crier’ when he was a junior, he told a story of his parents asking Queensland coach Ken Laffey to help stop that habit.

“I remember Ken ringing up on the landline when I was eight years old and saying ‘if you cry in this tournament, you’re going to have to have a break from tennis for a bit’,” he said.

“The only thing worse than losing, was not being able to play tennis.”

For the ultra-competitive Millman, it proved a memorable lesson.

“My mum and dad instilled in me from a very young age that competition is important and you’ve got to love to compete, but first and foremost you’ve got to be a good person, respect the game, respect your opponent and conduct yourself in a good manner,” he said.

“It’s tough for an eight year old to have those qualities, they have to learn them. My parents were incredible role models and they taught me that.”

Like many Australians during the COVID-19 pandemic, Millman explained he too had to be adaptive to stay active during this period.

“We’re not home that often. We’re normally travelling up to 40 weeks a year, so I didn’t really have a set-up,” he said. “Normally I can go into the (Queensland Tennis Centre) and they have everything, so I’ve had to be quite creative in some of my gym workouts with limited equipment.

“Something I’ve found throughout my career is that when I’m working out physically, I love variation. I don’t like the monotony of doing the same exercises every single day. Yes, it is good to be diligent and stick to a program, but I also love a change of scenery. Here in Queensland, as long as we weren’t congregating in more than groups of two, we could still get out once a day and get a bit of exercise.”

Stair climbs at Brisbane’s Toohey Forest and hill sprints at Victoria Park have helped Millman stay fit as he prepares for professional tennis to return.

“It’s definitely been a testing time, but I feel as if I’ve managed to cope well with it because I have quite a good understanding these days of what motivates me,” he said.