A goal to increase activity levels of kids provided the foundation for HomeCourtTennis, which can provide many benefits long after current levels of isolation end. 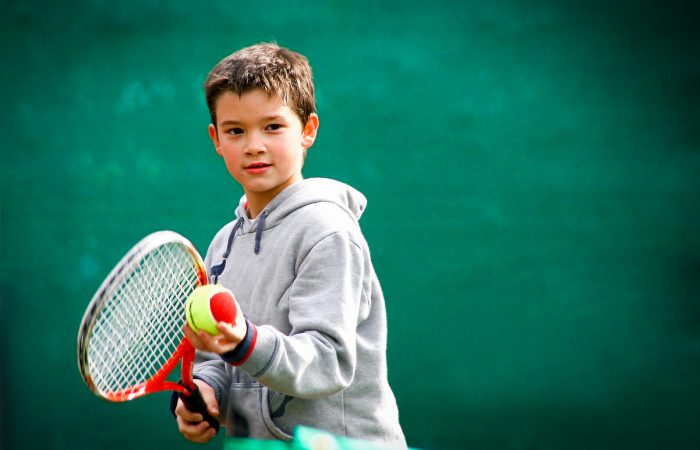 The concept of HomeCourtTennis was specifically designed to promote the notion of tennis in and around the home. This was in conjunction and complementary to the experience of children at the local tennis club, in schools and during coaching sessions.

It presents as a creative, adaptable and imaginative pursuit that ultimately leads to our children and youth moving more via tennis.

The innovative concept recently launched its first element – Games-making – which encourages students and players to design their own games during distance education at home.

While the timing seems perfect amid unprecedented restrictions, the foundations for HomeCourtTennis were in fact established in early 2018.

Dr Mitch Hewitt explained that Driveway Tennis – a metaphor for Tennis Anywhere, Anytime, with Anyone and Their Way – first began as a conversation with Associate Professor Shane Pill from Flinders University in early 2018. An academic paper in collaboration between Tennis Australia, Flinders University and The Australian Council for Health, Physical Education and Recreation (ACHPER) was subsequently conceived to help address a declining movement culture and promote the concept of playing tennis in and around the home.

“In late 2018, the ‘Movement to Move’ conference was held in Adelaide, a global summit surrounding the physical activity levels of children and youth around the world, which included Australia,” said Dr Hewitt, Tennis Australia’s Education Project Manager in the Education and Professional Learning team.

Australia received a D minus for a third consecutive report card for overall physical activity, only reinforcing an already known trend of physical inactivity. This repeated grade provided Dr Hewitt and collaborators with further impetus to pursue their development of a peer-reviewed paper entitled Driveway Tennis that encourages children and youth to consider tennis as a more flexible form of activity which is inclusive regardless of age, ability and access.

Initially conceptualised to show how the sport can be enjoyed at home, in parks and on beaches, the HomeCourtTennis initiative is now highlighting how children and youth can be creative with Games-making during lockdowns that resulted from the coronavirus pandemic.

“It provided a really timely period for them to realise the potential that they can actually play tennis in and around the home,” said Dr Hewitt.

Identifying inventive ways of playing is another opportunity for the development of physical skills. Dr Hewitt is delighted to share examples of students and players adapting to challenging environments, such as an extremely narrow hallway (“the ball was allowed to rally off the wall so it never went out,” he related) and in a backyard where patchy grass meant a wildly uneven playing surface.

“But they still had smiles on their faces and they were laughing even if the ball bounced in different directions and they had to move. Having to adapt was part of the fun for them,” said Dr Hewitt, who noted the pleasing variety of videos shared by many young students and players.

“They’ve all brought something that’s slightly different in creativity and imagination, particularly in their scoring systems and the courts they decide to construct.”

"We are living how my parents, my brother and I lived as children. We never went away. We played in the front and back yard and made our own fun."

Alongside the obvious development of movement and physical skills including backhands, forehands and volleys, the Games-making element of HomeCourtTennis is also helping children and youth build social and emotional behavioural characteristics.

“What I’ve loved is the reinvigoration of the students’ and players’ creativity and imagination and empowerment, which I see as beyond sport”.

Other longer-term benefits could also extend well beyond the current period of isolation. As HomeCourtTennis videos are shared through schools, coaches and via social media, young students and players are gaining new insights into the fun they can experience through tennis.

“If there’s currently children and youth that are not being coached and they’re not in a tennis club, experiencing the game at home might encourage them to say ‘hey, I don’t mind this game of tennis’,” said Dr Hewitt.

“Kids may say, ‘I might go and seek out a club, because I want to have a hit with my friends and play like we did in the driveway, but I want to have a go on the tennis court and perhaps even have lessons”

From an initial goal of encouraging children and youth to be more active, HomeCourtTennis is indeed developing into quite a movement.