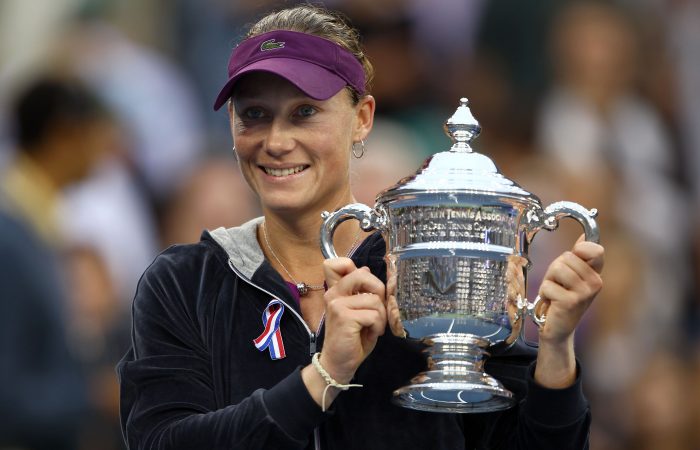 The adage “you don’t know what you’ve got until it’s gone” proved especially true for Sam Stosur.

In mid-2007 she was rapidly ascending the professional tennis ranks until suddenly besieged by health complications and sidelined for almost a year, her playing future became unclear.

Revisiting this period almost 13 years later, we know that, thankfully, everything turned out okay – Stosur became a regular top-10 force who scored a stunning triumph over Serena Williams to win the 2011 US Open.

Yet just a few years earlier, that looked unlikely.

“I didn’t know whether I was going to play again,” Stosur said when discussing her health issues, eventually diagnosed as Lymes Disease by an infectious diseases specialist in the US.

“But nobody who I was seeing told me I would never play tennis again. I always just had belief that I was going to get better.”

Recovery was lengthy, given what she suffered.

At Wimbledon 2007, her body rebelled. A range of physical symptoms included inflamed glands, a body rash and extreme fatigue – she slept in the locker room before doubles matches with Lisa Raymond – plus head and body aches, puffiness and swollen limbs.

“I’d show up at the courts every day with something else wrong with me,” Stosur recalled.

“I was in front of four doctors at one stage; they were calling other doctors (to discuss me). One day they talked about putting me in quarantine because they didn’t know if I was completely contagious and might spread something through the whole tournament. It was just bizarre.”

Stosur played through the discomfort at New Haven and the US Open, but was later hospitalised twice in New York with chest pains. And when she returned to her Florida base, she developed a crushing headache; another trip to hospital revealed viral meningitis.

It took four months of ongoing symptoms before all the puzzle pieces fit together for the diagnosis of Lyme Disease – a bacterial illness often caused by a tick bite and requiring oral and intravenous antibiotic treatment.

“(I was told) you’ve got to be super careful when you do recover because you can easily relapse,” Stosur said on the Racquet Magazine podcast in 2019.

“I didn’t do one minute more than what (the doctors and physios) said, because they drummed it into me about what you can and cannot do, and how slow I had to come back. And I’m talking starting with a 20-minute walk, trying to keep my heart rate under 120. That was so hard, to stay at a slow (enough) pace.

“But I stuck to it like you would not believe.”

Pre-illness, Stosur had scaled the heights in doubles, winning two Grand Slam titles with Raymond and peaking at world No.1 in 2006. In singles, she had recently pierced the top 30.

She certainly had not taken her career for granted until this point. Yet this unusual, unsettling setback forced Stosur – a player renowned for her fitness – to confront the reality that her body could completely betray her.

She also had to accept how far she had fallen.

READ: Rediscovering the love of playing

Having not played since the US Open, Stosur targeted a comeback in late April 2008 at some ITF tournaments in the US, for which she prepared at Canberra’s Australian Institute of Sport with coach David Taylor.

“Dave still remembers Brent Larkham, who was the AIS head coach back then, saying: ‘Dave, you can’t go with her. She’s not good enough!’.”

Encouragingly, she posted semifinal and quarterfinal finishes in her comeback events. “I actually won matches straight away which was really, really important,” she said.

She returned to the WTA Tour in Rome before winning her opening matches at Roland Garros and Wimbledon.

“All of a sudden I got the belief back,” Stosur recalled of her upset of 17th seed Shahar Peer in Paris.

After beating Raluca Olaru in the Wimbledon first round, Stosur said: “It’s amazing when you can’t do something that you love doing, how much you miss it and how much you want to get back to that. I want to be able to (again) experience that; practising and playing matches and having people cheer for you and all that sort of thing.

“It is a good feeling. When you don’t get it, you do start to miss it.”

She ended 2008 on the cusp of the top 50 and cracked the top 20 in 2009 after reaching her first Grand Slam semifinal at Roland Garros. After winning her first career WTA title in Osaka in late 2009, she excelled during the 2010 clay-court season, advancing to her first major final in Paris.

In 2011 she enjoyed her US Open breakthrough, while in 2012 she reached another French Open semifinal and the quarterfinals in her US Open title defence to complete a third straight top-10 season.

In those peak years from 2009 to 2012, Stosur reached at least the Grand Slam quarterfinal stage six times.

She returned to the top 15 in 2016 after notching a fourth French Open semifinal.

In her comeback, Stosur made the decision, despite a sparkling doubles career, to prioritise singles.

“I was quite young (when I got sick and thought) is this all going to be finished? And what am I going to do? Because this is all I’ve ever dreamed about doing,” she told the Racquet Magazine podcast.

“It did really make me stop and (reflect on my career). Having to start again, I was like, I need to almost put all my eggs in one basket and start doing everything I can for singles. Because I thought I could be better than 30 in the world.

“Even though (my illness) was a complete disaster and something I would never want to go through, if I didn’t, maybe I wouldn’t have made that decision when I did.

“And then who knows what could have happened?”