Australia holds a 2-0 advantage against Brazil after the opening day of the Davis Cup qualifying tie in Adelaide. 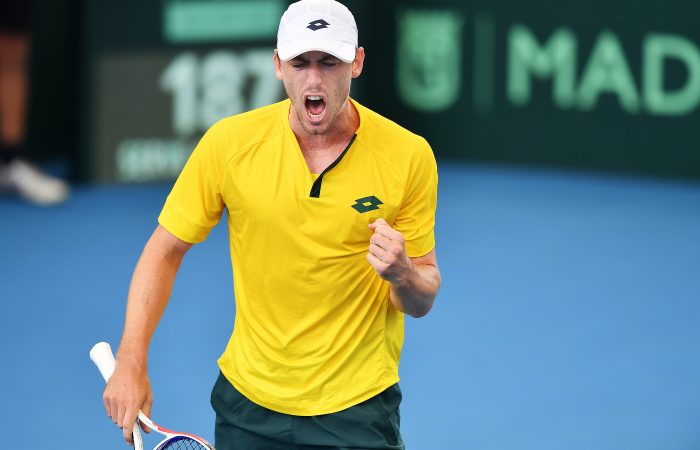 A gutsy comeback from John Millman has extended Australia’s lead in the Davis Cup qualifying tie against Brazil in Adelaide.

Millman posted a 4-6 7-6(0) 6-2 victory against Brazil’s Thiago Seyboth Wild to put Australia 2-0 ahead at the conclusion of the opening day.

The 19-year-old Seyboth Wild made a blistering start in his Davis Cup debut. Stepping into the court and dictating play with his explosive groundstrokes, the No.113-ranked Seyboth Wild raced to a 5-1 lead in the opening set.

“I was in a bit of trouble, that’s for sure,” Millman admitted.

A shell-shocked Millman showed his fighting qualities, working his way into the match following a 30-minute delay due to a medical incident in the crowd.

The No.43-ranked Millman won three consecutive games, saving a handful of set points in the process, and appeared to have somewhat stemmed Seyboth Wild’s momentum.

However, there was no stopping the Brazilian as he took the opening set 6-4 and went ahead an early break in the second set.

“I was trying to weather the storm, but there was not a whole lot I could do early on,” Millman said.

But once again, Millman dug deep.

The 30-year-old from Queensland broke Seyboth Wild when the teenager served for the match at 5-4 in the second set. With a vocal crowd on his side and Seyboth Wild’s frustrations growing, Millman then played a perfect tiebreak to level the match at one set-all.

From the verge of defeat, Millman was back in the match.

The Australian broke in the fifth game, edging ahead for the first time in the match at the two hour, 37 minute mark. From there, Millman did not lose another game.

“I think I showed a bit of grit out there,” Millman said of his spirited comeback.

“That’s what Davis Cup is all about, never giving up. That’s the Australian way.”

Earlier in the day, Jordan Thompson gave Australia a perfect start with a straight sets win against Thiago Monteiro.

Tickets for day two of the tie at Adelaide’s Memorial Drive Tennis Centre are available via Ticketmaster.