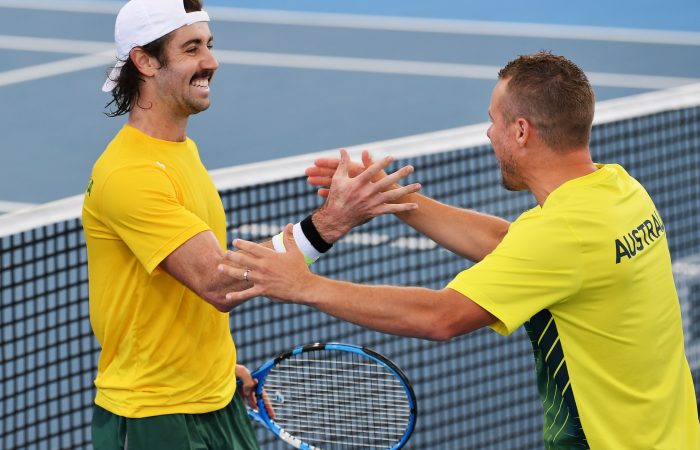 Jordan Thompson has provided Australia with a dream start in the Davis Cup qualifying tie against Brazil in Adelaide, posting a 6-4 6-4 win over Thiago Monteiro in the opening singles rubber.

“It’s massive,” Thompson said of his victory. “I didn’t want to be sending Johnny (Millman) out there 0-1 down. It’s the perfect start being 1-0 up.”

Monteiro tested Thompson early, using his powerful forehand to keep the 25-year-old Australian on the back foot. However, Thompson held firm to secure the first break in the 10th game and claim the opening set in 44 minutes.

“He told me to put returns in. Any return is a good return. Scoreboard pressure,” Thompson said of the advice captain Lleyton Hewitt shared during a tight opening set.

“You have to listen to that because Lleyton’s been out there.”

It helped world No.63-ranked Thompson quickly take control of the match. He broke the No.82-ranked Monteiro to love in his opening service game of the second set and raced to a 4-1 advantage.

Although the unforced error count was mounting for Brazil’s top-ranked player, Monteiro managed to snare the break back in the seventh game. Earning a first break point on the Thompson serve, he took advantage to curb the Australian’s building momentum and soon levelled the set at 4-all.

Yet Thompson held his nerve, holding to love in the ninth game to put the pressure back on his 25-year-old Brazilian opponent. Then just as he did in the opening set, Thompson broke Monteiro’s serve in the 10th game and secured victory in 81 minutes.

“I served at a very high percentage, made a lot of returns and didn’t miss too many balls from the back. It was just a really solid match,” Thompson said.

“It’s not easy playing Davis Cup, so I’m very pleased with that performance.”

Thompson thanked a vocal Adelaide crowd for their support.

“It’s great to have that Aussie support and know that the crowd is behind you,” he said.

Tickets for the 6-7 March tie at Adelaide’s Memorial Drive Tennis Centre are available via Ticketmaster.