Millman ready to step up in Davis Cup tie

World No.43 John Millman is not feeling extra pressure ahead of this weekend's Davis Cup qualifying tie against Brazil in Adelaide. 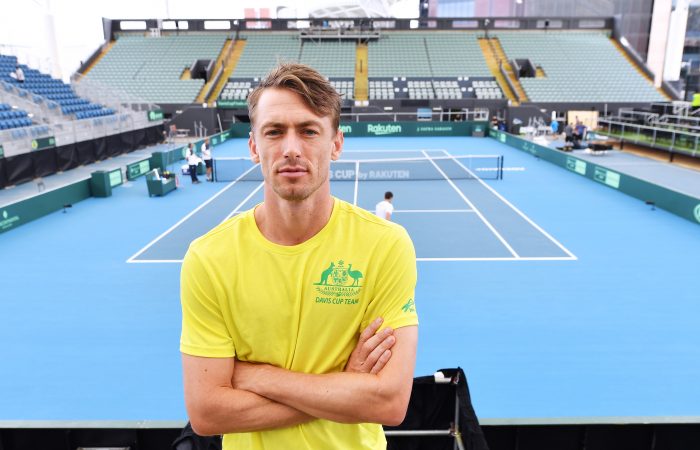 Set to spearhead the Australian Davis Cup team for a first time, John Millman is not shying from the challenge.

“It’s a different type of pressure when you’re playing for your country but it’s one that I really enjoy. It doesn’t come around too often, so I try to make the most of it when it happens,” Millman admitted.

“Any chance to play for Australia is the pinnacle of our sport.”

With Alex de Minaur and Nick Kyrgios sidelined with injury, the No.43-ranked Millman becomes the highest-ranked member of the Australian team for this weekend’s qualifying tie against Brazil in Adelaide.

“I have always been someone that when I go on court I just try to control the controllables and give it everything, whatever number I play or whatever role I’m given. I just try to do that to the best of my ability.”

“(Millman) really is the heart and soul of this team in a lot of ways,” Hewitt told SEN earlier this week.

“He’s a leader as well, because he does all the right preparation coming in. In the Madrid finals last year, he was number three in line in the singles behind Alex de Minaur and Nick Kyrgios but he did all the right preparation, put himself out there and said ‘Rusty mate, I’m ready to go if you ever need me for anything – singles, doubles or picking up balls, whatever it is’. They are the team guys you need out there, that builds the culture for the rest of the team.”

Millman’s team-first mentality was evident as he discussed this weekend’s qualifying showdown with Brazil, refusing to confirm he would take the No.1 singles spot.

“I don’t think any spot is a guarantee, I don’t think my spot is locked in,” the 30-year-old from Queensland told media today. “I think that’s a really good thing in the team that we’ve got a bit of flexibility and a lot of guys who are playing some pretty good tennis and can put their hands up.”

Millman does not expect to know whether the No.1 singles spot is his until shortly before tomorrow’s official draw.

“The cap (captain Lleyton Hewitt) is playing his cards close to his chest, but that’s not too dissimilar to any of the other ties,” Millman said.

“I think the boys have done an incredible job of really bringing intensity to each training session. It is something that’s really been instilled in us from Lleyton and Rochey (coach Tony Roche) especially, it’s something they are all about. We just try to approach each day with maximum intensity and come game day when the decision gets made, every single one of us will be ready to perform.”

A lot of discussion about the Aussie #DavisCup team golf session ⛳️ @johnhmillman offers his analysis of how it all went down, including some dodgy shenanigans 😅#GoAussies | #AUSBRA | #Adelaide pic.twitter.com/xpZvJHUzmV

“I’m fully recovered now,” assured Millman. “The last couple of weeks on the tour I’ve been trying to find my feet again, but I think this (Davis Cup) camp has come really at the right time. I’ve managed to get a lot of hours on the court and I’m feeling really good. If my number is called, I’ll go out there, perform to the best of my ability and give it a real crack.”

Millman boasts a 1-2 win-loss record in Davis Cup, scoring his first win during a qualifying tie against Bosnia and Herzegovina in Adelaide in 2019.

“I really enjoy playing here and have fond memories from last year when we qualified for Madrid,” Millman said.

“There’s extra added incentive when you’re playing a home tie in front of your home crowd. It provides extra drive to represent your country to the best of your ability and our country likes winners, so we’ll try to do that.”