Alex Bolt continues his impressive run at the ATP Challenger in Launceston, storming into the final. 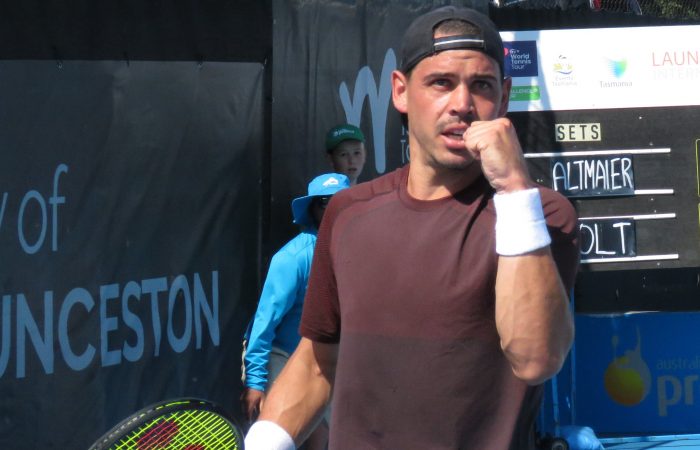 Alex Bolt displayed his dominance in Launceston on Saturday, brushing aside Daniel Altmaier in just an hour of play.

The second seed has looked sharp all week, dismissing the German 6-1 6-4.

“I think the big thing was trying to keep my level constant throughout the whole match,” Bolt, 27, said. “I felt if I could just maintain the pressure I could get in top of him.”

Meanwhile, it looked like it might be another long day for Kimmer Coppejans – who had already survived a number of tough encounters this week – when the sixth seed took to the court against Egyptian Mohamed Safwat (No.9) for their semifinal encounter. The Belgian started strong, claiming the first set, however it was not to be as the in-form Safwat managed to fight back to claim a place in Sunday’s final with a 4-6 6-4 6-3 victory.

Bolt and Safwat have met previously in Launceston, back in 2017, with the Egyptian taking the honours in straight sets.

“It was battle I remember,” said Bolt. “I just couldn’t hit the ball through him. He’s playing some of his best tennis right now too. I’m looking forward to it.”

Fifth seed Destanee Aiava also blazed her way through to the women’s final on Saturday, taking care of American and last week’s Burnie finalist Sachia Vickery (No.2) 6-1 6-4. Victorian Aiava will face Asia Muhammad in the final after the American second seed defeated Ayano Shimizu (No.6) of Japan 6-1 7-5.