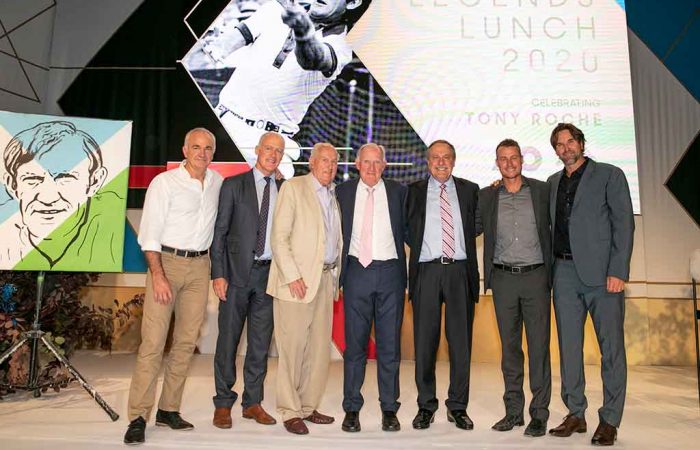 It’s not known as the “legends lunch” for nothing. In a special afternoon for Australian tennis they were everywhere – Rod Laver, Margaret Court, Ken Rosewall, Judy Dalton, John Newcombe, Lesley Bowrey, Pat Rafter and Lleyton Hewitt all among the guest list at the annual gathering of greats on the final Saturday of the Australian Open.

They were joined by a string of international stars, including Australian Open 2005 champion Marat Safin, 2009 finalist Dinara Safina, three-time semifinalist Tommy Haas, as well as Daniela Hantuchova, Goran Ivanisevic and many others.

But it was Tony Roche, arguably among the greatest Australian legends of all, who was most feted as past players, Roche’s family and many others in the tennis community celebrated the many achievements of the multiple major champion and highly respected coach.

While famed for his lethal left-handed serve and the crisp volleys that helped him claim the 1966 French Open title and lift 12 Grand Slam doubles trophies with Newcombe, it was Roche’s personal qualities that were most warmly acknowledged by fellow Australian stars.

Highlighting his influence over six decades and multiple generations, Jelena Dokic, Hewitt, Rafter, Newcombe, Margaret Court, Liz Smylie and Judy Dalton (with whom he won the 1966 Australian mixed doubles title) were among many who spoke of Roche’s influence.

“He taught me what it is to be down to earth, work hard and be disciplined,” said an emotional Dokic, who related that Roche became an important role model as a coach when she was a teenager.

For Newcombe, camaraderie was a key quality in their relationship. “I’m proud to say he was a mate and a good bloke,” he commented, the fellow Australian also sharing many stories of both their doubles partnership on tour and later combining as captain and coach for the Australian Davis Cup team.

Court, who was part of a travelling Australian team that included Roche, Newcombe and Lesley Bowrey as a young player, spoke equally fondly of her countryman.

“He’s such a nice guy and a very humble person,” said Court. “He was always that one you could go to. There was that honour there, respect there, he represented his nation, he coached others.

“He’s a great role model for this nation.”

Roche showed those qualities as he characteristically turned attention from himself and related an important gesture from Istvan Gulyas, whom he defeated 6-1 6-4 7-5 to claim the 1966 French Open title.

Roche had earlier injured his ankle while contesting the doubles semifinal with Newcombe and after withdrawing from that match, was advised by a doctor it was unlikely he could play the final.

But Gulyas, described by Roche as a “wonderful human being from Hungary” agreed to delay the championship decider by a day in order for it to continue.

“I couldn’t imagine that happening today,” Roche related. “That was a pretty big thing for him because at that stage he was 34 years of age, coming from the Iron Curtain, they hardly got out to play.

“It was a big deal for him … I was lucky enough to have a French singles title because of him.”

With 2020 an Olympic year, there was also a celebration of several Australian female medallists, with Wendy Turnbull, Liz Smylie and Nicole Bradtke reflecting on those high points in their respective careers.

There was also a moving tribute to Peter McNamara, another Australian great who lost a battle with cancer last year, as Paul McNamee related experiences from their famed “Super Macs” doubles partnership.

A final word went to Roche who was touched by the recognition and gracious words of support.

“For all the wonderful words all the great champions have said, thank you,” he said, before a standing ovation from the many who’d helped to celebrate his many achievements.