Ash Barty, who will remain world No.1 in the next release of WTA rankings, is counting the positives after her most successful Australian summer so far. 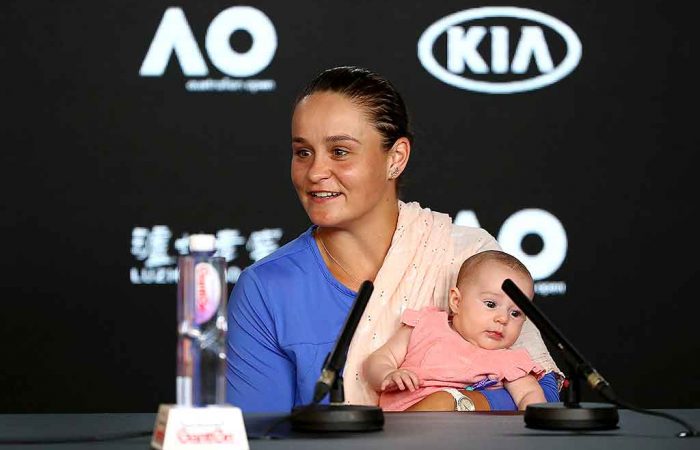 The symbolism couldn’t have been clearer as Ash Barty arrived at a packed media conference holding her baby niece, Olivia, following a loss to Sofia Kenin in the Australian Open semifinals.

Exiting to an opponent ranked 14 places lower – and holding set points in each of the sets she surrendered – it was an undeniable upset for the world No.1.

But Barty was already looking ahead knowing that the future is bright.

“I mean, perspective is a beautiful thing,” said the Queenslander after Kenin’s 7-6(6) 7-5 victory.

“Life is a beautiful thing. She (Olivia) brought a smile to my face as soon as I came off the court. I got to give her a hug. It’s all good.”

It was especially good as Barty assessed the many high points of her most successful Australian summer to date.

After lifting a first WTA trophy on home soil in Adelaide ­– and celebrating her eighth singles title overall – Barty became only the 14th Australian woman to reach an Australian Open semifinal in the Open era.

And with a first victory over powerful Petra Kvitova at a Grand Slam in the quarterfinals, she extended a winning streak to an impressive nine matches.

You always bring out the best in me. Thank you @Petra_Kvitova for another great battle 🌟 pic.twitter.com/iasxhY4sJZ

“The next time I walk out on court, the next time I kind of wake up in the morning, every experience you need to learn from. I’ve done that. I feel like as a team we’ve grown. We’ve enjoyed every single minute.

“I mean, can’t wait to get started for kind of the rest of the year. I feel like it’s going to happen pretty quickly and we’re going to be back sitting at this table with an Australian summer next year.”

Should she return next year as the No.1 Australian, Barty will be perfectly equipped to manage inevitable expectations. For the down-to-earth Queenslander, those external pressures simply don’t exist.

“You guys spoke about them a lot. I felt like I answered a lot of questions without knowing the answer,” Barty reasoned.

“I mean, for me, I’ve just tried to go about my business the same every single day. It’s regardless of whether I was 50 in the world or 100 or 1 in the world. I try and prepare and do everything exactly the same.”

That preparation now continues for WTA tournaments in Dubai and Doha, before Barty turns her attention to high-stakes US events at Indian Wells and Miami. Victory in the latter last season was a first significant step in the Queenslander’s rise to world No.1.

It’s a position she still occupies comfortably after the Australian Open; in the next release of WTA rankings next Monday, Barty will occupy top spot for a 29th week.

And yet it’s a position that apparently doesn’t register for the popular Australian. “A lot more seats are full in here,” said the 23-year-old, when asked in that media conference to describe her life as the world’s top player.

“Sometimes I get the privilege of playing on the bigger courts. But really that’s about it.

“Nothing’s really changed for me or my team. We’re trying to chip away every single day to get better as people, to get better as tennis players. It just so happens that we got the No. 1 ranking next to the name on the draw.”

Baby niece Olivia still clutched tightly, there was little more for Barty to expand on.

This Australia Open run had ended, but tennis – and her life – will progress happily on.