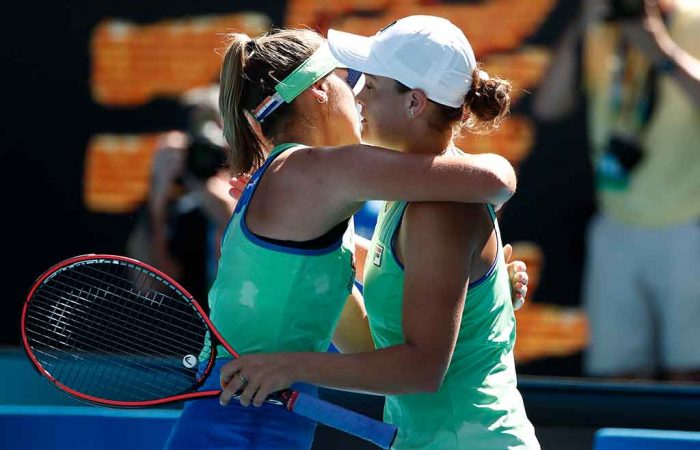 Kenin defied searing heat and her world No.15 ranking to upset the top seed 7-6(6) 7-5 at Rod Laver Arena on Thursday.

While Kenin gets the chance to claim her maiden Grand Slam crown, Barty will rue being unable to convert either of two set points from 6-4 up in the first-set tiebreaker or another two serving at 5-4 in the second set.

A hot favourite to become the first Australian woman since Wendy Turnbull 40 years ago to make an Open final, the world No.1’s defeat left the packed crowd on Rod Laver Arena shellshocked.

Even Kenin, who lost to Barty in the French Open fourth round last year, was pinching herself in the aftermath.

“Honestly, I’m so speechless. I honestly can’t believe this. I’ve dreamed about this moment since I was five years old,” said the Moscow-born 14th seed.

“I’m so speechless, thankful. I have worked so hard to be here. Thanks to my dad and everyone back home.”

Barty dominated much of the opening set, conceding only four points in her first five service games.

But she paid the price for not cashing in on three break-point chances in the sixth game, as Kenin snatched the set in the breaker.

A winner of a tour-best 13 matches from a set down last year, Barty looked to be mounting a signature comeback when she charged to a 3-1 lead in the second set.

But, in temperatures nudging towards 40 degrees in Melbourne, the top seed was unable to level the match, as Kenin reeled off four straight games from 3-5 down to seal victory after one hour and 45 minutes.

“I knew I needed to find a way to win. Thank you so much,” Kenin told the crowd.”This wasn’t an easy one. I’m so grateful and thank you for this moment.”