Few occasions are as serious to a pro player as the business end of a Grand Slam, but a relaxed Ash Barty is taking a level-headed approach into her first Australian Open semifinal. 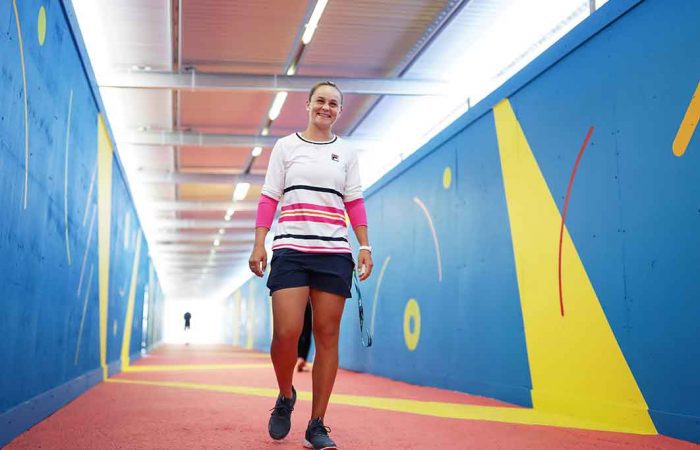 History, high expectations and the huge mountain she’s climbed to reach the semifinals of her home Grand Slam could all have made the discussion list as Ash Barty completed that feat at the Australian Open.

Instead, it was fun team banter, everyday life and other sports interests that became the talking points when the 23-year-old Queenslander became the first Australian woman to achieve the milestone since Wendy Turnbull 36 years ago.

Barty even had some cheeky fun with the media.

“You guys are scratching the barrel, aren’t you?” the world No.1 laughed when questioned whether the red t-shirt her partner Gary wore for her quarterfinal against Petra Kvitova had become a superstition this tournament.

“He likes the colour red. It was a Fila shirt. It was on top of the pile that I did of washing yesterday. That’s all there is to it.”

There was an equally down-to-earth response when Barty was questioned about the “fuss” of her new life as the world’s No.1 player.

“I’d prefer to just be sitting at home just living my quiet, little life. I mean, no offence, but not having to chat to you guys every day would be pretty good,” said Barty.

“I feel like I have nothing to say. I’m talking in circles a little bit.”

Delivered with a smile, it was a statement that underlined Barty’s knack of not taking herself too seriously – an approach that has, in many ways, been a factor in her rise to Grand Slam heights and the top of the women’s rankings.

It was also evident as Barty took a fun dig at her coach Craig Tyzzer, even as she was lauding his profound influence, during her on-court interview at Rod Laver Arena.

“He’s coach of the year for a reason,” said a smiling Barty of Tyzzer, who was recently named by the WTA as the best coach on tour for the 2019 season.

“He carries his trophy around in his backpack just because he loves to look at it.”

Also joking about the “1000-word paragraphs” Tyzzer sends to Barty after scouting opponents, the Queenslander hinted at the relaxed approach that has created such a successful team dynamic.

“Every time I get an opportunity I’m going to make fun of my team. That’s just a given,” she later related. “We do that on a daily basis. You know, it’s good fun.”

Which is not to suggest that Barty takes any of her team’s contributions for granted.

“He’s the best at what he does for a reason,” she stressed of Tyzzer. “It’s certainly nice having him in my corner because I feel like he could probably pick me apart pretty easily.”

As she emerged victorious from a cat-and-mouse battle with Kvitova, it was clear that Barty and her team had done their homework. The world No.1 saved eight of nine break points to battle through a gripping first set, before running away with the 7-6(6) 6-2 triumph.

You always bring out the best in me. Thank you @Petra_Kvitova for another great battle 🌟 pic.twitter.com/iasxhY4sJZ

The intense mental challenge, said a relaxed Barty, only added to the joy of the occasion.

“I think it’s exciting. It’s a challenge. I love it. I love testing myself against Petra,” said Barty. “She has this way of bringing out the very best in me.”

The Australian has defeated the 21-year-old American in all but one of their five previous encounters, the only loss coming last year in Toronto.

Another challenge for Barty could well be the weight of expectation. Turnbull’s 1984 milestone marking the last time an Australian woman has progressed so far at the Australian Open, Barty is also the first home-grown female to reach the semifinals in the Melbourne Park era.

It’s opportunity, though, that is propelling the world No.1 forward.

“I’m excited. My team’s excited,” Barty insisted. “We love the opportunity of getting another match out on that beautiful court.”

And with that level-headed perspective, there’s also an appreciation of how much has changed for Barty since she made her Grand Slam breakthrough as the 2019 French Open champion.

“This is a new experience for me. I’m just going to try and take it in my stride, learn as much as I can and go from there.”