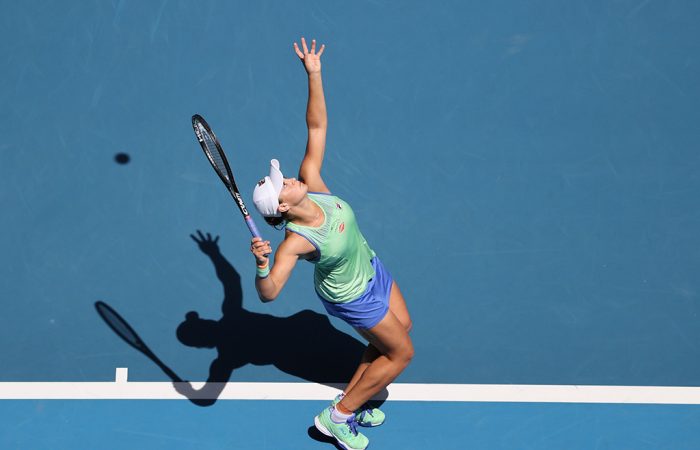 Clutch as they come, Ash Barty has revealed the motivation behind developing her deadly serve into the most reliable weapon in women’s tennis.

The world No.1 enters Thursday’s Australian Open semifinals leading her remaining challengers in almost every serving department at Melbourne Park.

Barty tops the four semifinalists for aces, trailing only Julia Goerges in the entire draw, and has won 80 per cent of her service games.

But it’s her unrivalled 29 break points saved that underlines the Australian’s extraordinary capacity to absorb pressure heading into her semifinal with American 14th seed Sofia Kenin.

And just as the great Serena Williams spent her early years mastering the motion of serving, Barty credits her first coach Jim Joyce for instilling the importance of landing the first blow in rallies.

“It was just a shot that I learned, a shot that Jim taught me and it’s probably the only shot in tennis you have full control over,” Barty told AAP.

“It’s changed and developed over time but I as I’ve grown and become a lot stronger, it’s become more of a weapon.

“But it’s something that we work on every day knowing it’s a shot for me that can put me in control of the point.

“And, at times, it’s not as much of a weapon because there are girls out there who are bigger and stronger who can do just as much, if not more, with their serve.

“But, for me, it’s a starting point to try and put me in front in the point.”

“It’s nice to know at times that I can rely on that but it’s also nice to know that when my serve is not there that I also have other weapons to help me out.

“So, for me, it’s all about trying to have the most complete game as possible.”

Barty has been victorious in four of her five previous encounters with Kenin, including last year’s fourth-round clash at the French Open after the American had beaten Williams in the previous round.

But a hard-court loss to the 21-year-old in Toronto last August is enough to have the tournament favourite on guard.

“She’s an exceptional competitor. Loves to put herself out there, test herself on the biggest stage,” Barty said.

“Have played her a number of times now, with some results going both ways. She has a great knack of controlling the court from the centre of the court and being that first-strike player.

“It’s going to be important for me to try and nullify that if I can.”

Bidding to end Australia’s 42-year Open title drought, Barty would be the first local woman to make even the final since Wendy Turnbull in 1980 should she navigate her way past Kenin.