Ash Barty becomes the first local female semifinalist in 36 years at the Australian Open after the world No.1 scored a straight-sets victory over Petra Kvitova on Tuesday. 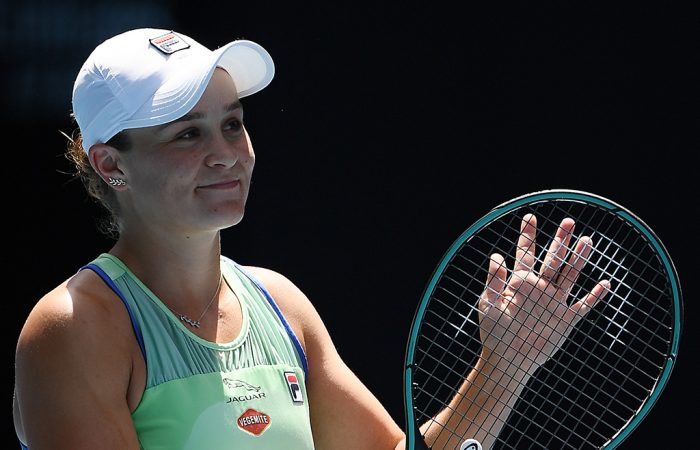 Ash Barty has become the first Australian woman through to the Australian Open semifinals at Melbourne Park with a straight-sets win over Petra Kvitova at Rod Laver Arena on Tuesday.

Barty survived a set point in a torrid opening stanza before streaking away in the second set to win 7-6(6) 6-2, her ninth straight match victory and 100th career victory on hard courts.

The world No.1 will line up against 14th seed Sofia Kenin on Thursday, aiming for a place in her first Australian Open final.

“She’s an exceptional competitor. Loves to put herself out there, test herself on the biggest stage. Have played her a number of times now, with some results going both ways,” Barty said of the American, who beat Ons Jabeur in straight sets in the day’s first quarterfinal.

“She has a great knack of controlling the court from the centre of the court and being that first-strike player. It’s going to be important for me to try and nullify that if I can.”

After losing her first four meetings with Kvitova, Barty has now won her most recent four to tie the head-to-head series.

The victory also served as revenge for her 6-1 6-4 loss to Kvitova at the same stage of the Australian Open last year.

This time around, however, the match was played in the warmth of the afternoon sun, as opposed to the heavier, cooler conditions under lights that were a feature of their clash 12 months ago.

And Barty thrived in this setting, working points with her heavy forehand and versatile slice backhand to put Kvitova in uncomfortable positions.

It wasn’t long into the match where Kvitova had already notched an unforced error count in the double-digits. But in game seven, she made a move to truly challenge Barty.

Teeing off successfully on her big groundstrokes, she moved ahead 0-40 — before Barty returned scores to deuce — and earned a further two break points in an increasingly epic game.

Yet Barty saved the fifth with a magnificent point ending with an inside-out forehand winner, and kept her nose in front.

Barty was again forced to fight her way out of trouble when Kvitova surged ahead 15-40 in the 11th game; unforced errors ultimately hurt the Czech.

And in the subsequent tiebreak, it was again Barty’s fighting, scrapping qualities that kept her alive.

Initially down 3-1, she played incredible defence to keep a rally alive that Kvitova would have won against almost any opponent, and levelled scores at 3-3.

“I want to watch that point. I felt like I was run ragged around everywhere, just trying to throw the ball up to give myself some time,” Barty said.

Great defense by Barty to prolong the rally to 22 shots and get back on serve in this tiebreak.

Win or lose, Ash Barty will always have that point. One of the best defensive points of this Australian Open to blunt the bludgeoning of Kvitova

“I just remember trying to stay alive in the point because I knew it was a big one. A big difference swapping ends at 2-4 than there is at 3-3, just in a sense of trying to keep yourself in touch.”

Kvitova earned a set point at 6-5 thanks to a huge first serve, but from this point Barty played measured, composed, solid tennis, outlasting Kvitova in a probing rally to win her third point in a row — and with it, the set.

It was a huge moment. And both women knew it.

From this point, Barty freed up, and Kvitova faded.

The Australian broke in the first game of the second set, extended her lead to 3-0 with a delightful backhand slice lob winner, and soon led 4-0 after Kvitova’s game became littered with errors.

The two-time Wimbledon champ narrowed the gap to 4-2 when she briefly found her range, but Barty wrested the momentum back in the seventh game to earn an opportunity to serve for the match.

Down 15-40, Barty’s serve rose to the occasion; on the next four points, she conjured two aces and a service winner to seal victory.

“I think it’s exciting. It’s a challenge. I love it. I love testing myself against Petra. She has this way of bringing out the very best in me,” Barty said.

“She came at me with all guns blazing. That first set could have gone either way. It was really important to try and get my nose ahead when I could. It was nice to save a set point and get a roll on early in the second set with a couple of quick breaks.”

In five career meetings with Kenin, Barty has won four times, including their most recent match in the third round of the WTA event in Wuhan.