Kyrgios sees off Simon to reach AO third round

Nick Kyrgios overpowers Gilles Simon in four sets at Melbourne Arena to advance to the last 32 at Australian Open 2020. 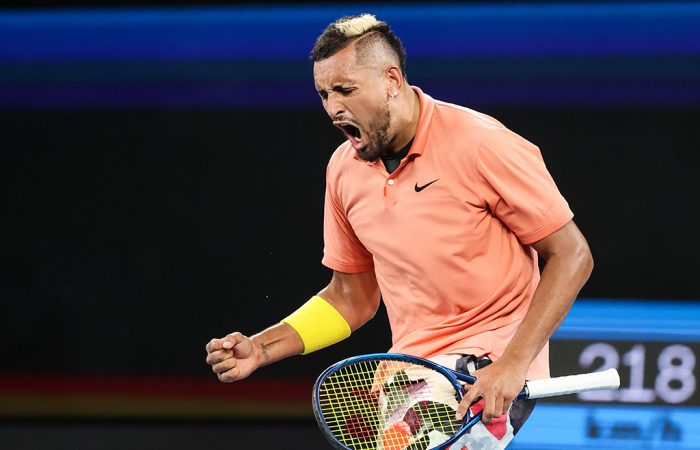 Kyrgios survived a third-set slip-up to secure a spot in the third round at Melbourne Park.

The Australian led Simon 6-2 6-4 4-2 before the former world No.6 worked his way back into the contest after Kyrgios twice dropped serve twice to lose the third set.

However, the 23rd seed recomposed himself to wrap up the match in two hours and 49 minutes, sending the crowd at Melbourne Arena into raptures.

Nick reigns supreme 🙌@NickKyrgios holds firm against Gilles Simon, def. the Frenchman 6-2 6-4 4-6 7-5 and reaching the third round at the #AusOpen for the fourth time.#AO2020 pic.twitter.com/LsSeFKzPDf

“You guys are awesome — that’s why I usually request to play on here as long as I can, because it’s such a home feel,” he said on court.

“I definitely lost my way a little bit. He’s a tough competitor, he knows how to win matches.

“I just had to refocus — I could have done to a very dark place in the fourth set but I somehow put it away.

“It was a tough match, I’m just happy to get through. That would have been very interesting if it went to a fifth set.”

It was a powerful, attacking display, with Kyrgios smacking 28 aces among 67 winners and advancing to the net 42 times, for 25 winning points.

The victory takes his singles record in 2020 to an impressive 5-1.

Kyrgios next faces the winner of the match between 16th seed Karen Khachanov and Swede Mikael Ymer, who are currently locked in a fifth set.

“But I’m just taking it one match at a time at the moment.”