As renowned entertainer Nick Kyrgios returns to a favourite stage at the Australian Open, the similarly compelling Alexei Popyrin is also stepping into the world tennis spotlight. 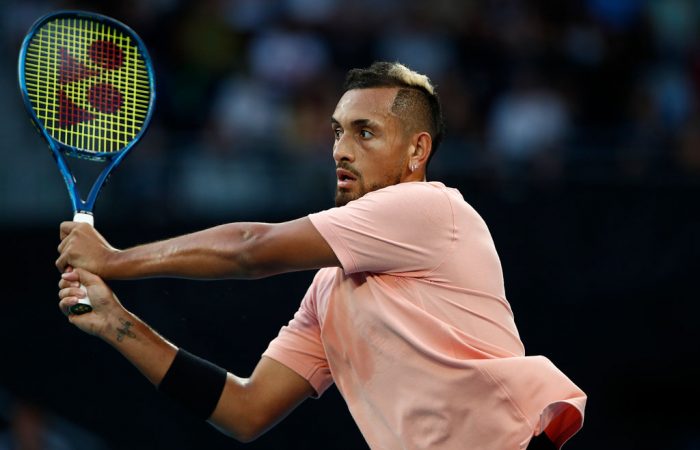 There are times when Nick Kyrgios seems more a performer than player, the entertainment coming as much from his huge personality as it does from an anything-can-happen game.

So it’s only fitting that Kyrgios has found such a special stage at Melbourne Arena, where tonight the 24-year-old will meet Gilles Simon in the Australian Open second round.

On Tuesday, Kyrgios gave one of his finest performances there as he overcame Lorenzo Sonego 6-2 7-6(3) 7-6(1) with a dazzling display of shot-making flair.

For 133 enthralling minutes, the Australian fed off the energy of an enraptured crowd – many of whom had queued hours earlier – as he competed with both power and resolute intensity.

“I just wanted to come out here and put on a good performance. I was really excited. It was awesome,” Kyrgios said.

“This is one of my favourite courts in the world – I always request to play here early on. I just feel super comfortable.”

As a post-match interview with superstar John McEnroe provided an intriguing encore, there was also powerful reminders that at this Australian Open, Kyrgios is playing for far more than himself.

During the entertaining exchange, McEnroe revealed he’d be donating $1000 for every set that Kyrgios wins in Melbourne – adding to the outpouring of support that the Australian himself inspired in the tennis community with his early pledge to provide $200 for each ace he hits.

It means more than just tennis.

Talking to @NickKyrgios, John McEnroe says he will donate $1,000 towards Bushfire Relief for every set NK wins during the tournament.#AusOpen | #Aces4BushfireReliefpic.twitter.com/dWruH7I7t9

It’s boosted the remarkable focus that’s shaped the season so far for Kyrgios, a winner of four of the last five matches he’s played.

“I guess it’s just a perspective thing, isn’t it? Why am I really getting mad on the tennis court with everything going on?” he said.

“I felt like I was very focused today. Every match I’ve played this year, I’ve been pretty good. It’s probably because of everything going on.”

As the spirited Kyrgios becomes an idol to fans and emerging players, another young Australian is showing some superstar qualities of his own.

Alexei Popyrin, still just 20, continued his remarkable Grand Slam record – winning at least a round in the first five majors of his career – as he overcame his childhood idol Jo-Wilfried Tsonga to progress.

And while an injury retirement form the AO 2008 finalist wasn’t the preferred outcome, the athletic and talented Popyrin took important gains from their Melbourne Arena encounter.

It was an honour to share the court with such an inspirational player! @Tsonga7 has been an idol for me since I first picked up a racket. @ESPN @ESPNTennis @TennisAustralia @Nike_Court @Head_tennis #AusOpen #AO2020 #Tennis #ESPN #AussieTennis #PopOnTop #TeamMouratoglou pic.twitter.com/X6AcMceeRz

The confidence is no accident, Popyrin pointedly managing his early career to ensure maximum development. Where many players of a similar age carefully progress through Challenger events, the Australian has instead tested himself at a higher level on the ATP Tour.

That approach has helped the young Australian develop both maturity and composure – qualities that ensured Popyrin was far from overawed by a first match against the man who’d sparked his tennis ambitions.

“It was his flair,” said Popyrin, when asked to explain how Tsonga captured his imagination as a young player. “As a kid, everybody loves flair. It was his forehand, his serve, the way he acted on court. He was an entertainer. He still is an entertainer.

“When he made it to the finals, I was jumping around my living room like a crazy kid.”

And now Popyrin shows the potential to become that inspiration to other young players. One of only eight players inside the top 100 aged 20 or under, Popyrin upset Dominic Thiem in his Grand Slam debut at AO 2019 and went on to push Lucas Pouille to five sets in their third-round encounter.

The journey continues now against Jaume Minaur, a world No.90 from Spain, who Popyrin defeated easily in their only encounter at Indian Wells last season.

“I know what to expect of him,” said the respectful but assured Popyrin.

A qualifier at 10 ATP events last year, the world No.96 knows the hard work is paying off in his fifth major.

“I think it shows in Grand Slams,” Popyrin reflected.” In Grand Slams I feel at home. I felt at home from the first Grand Slam last year, Aussie Open.

“I think it’s all about experience that comes together. It’s paying off right now.”