John Millman's stellar start to season 2020 continues as the Queenslander moves into the Australian Open's third round, yet Jordan Thompson and Marc Polmans lost on Wednesday. 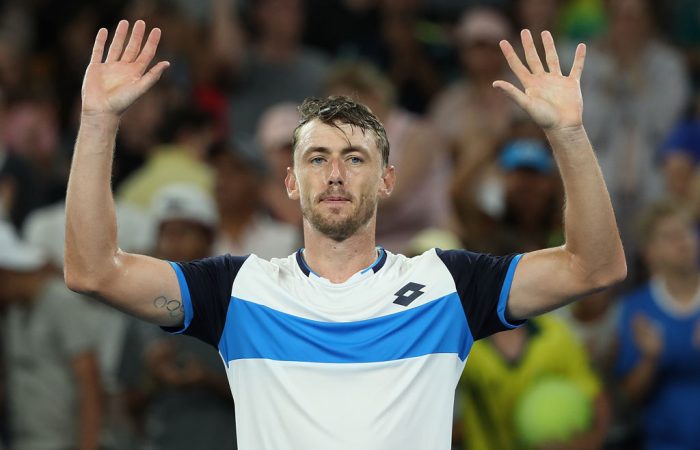 John Millman dismissed Next Gen prospect Hubert Hurkacz 6-4 7-5 6-3 to sail into the Australian Open third round for the first time since 2016.

The crowd favourite built on his four-sets triumph over Auckland champion Ugo Humbert in his opening match to put in another polished performance on Melbourne Arena.

The world No.47’s reward for taking out the 31st seed is a blockbuster third-round meeting with 20-time Grand Slam champion Roger Federer, who beat Filip Krajinovic later on Wednesday night.

“There’s no doubt about it I get pretty stressed out there,” admitted the Queenslander, before hailing the home fans.

“This is the beauty of playing your home Slam. These guys have supported me for years and years, I’m just glad I gave them something to cheer about.

“Hubert didn’t give up there. I was a double break up and I’m a little disappointed I didn’t capitalise. That put a bit of unwanted stress on me and aged me a couple of years. It was tough towards the end there. I know what a quality player he is.

“It’s high pressure and I’m just lucky to play out here. Once upon a time it was a pipeline dream to be playing Grand Slam tennis. For it to become a reality is pretty special, so you’ve got to appreciate the good times and this is definitely one of them.”

Later, in a match that finished after midnight, Millman’s countryman Jordan Thompson went down in five brutal sets to No.12 seed Fabio Fognini.

The Italian took the first two set before Thompson, buoyed by the Margaret Court Arena crowd, staged a magnificent fightback.

RELATED: Barty powers into third round

Millman, playing in his sixth campaign at his home slam, rallied from an early break down to command the first set.

The towering Hurkacz, having defeated Diego Schwartzman, Borna Coric and Dominic Thiem in ATP Cup action, surged back into contention, transitioning up the court with ease to chalk up a 3-1 lead.

However, Millman was feeding off the ardent local support once again and kept gesturing to maintain his focus. Patient play was rewarded, chasing down a net cord to then level at 4-4 with some remarkable reactions at the net.

From there Millman made the Polish youngster do all the running and clinched the crucial break with a rasping backhand down the line to soar two sets in front.

Hurkacz was forced to recover from two sets down in an opening round marathon with qualifier Dennis Novak and the 22-year-old appeared to run out of steam when two break point opportunities vanished at 2-4.

Millman managed to serve out a tense final game before letting out a yelp of relief.

His meeting with Federer will be a rematch of the 2018 US Open fourth round which the Australian won for his finest Grand Slam showing to date.

“I’m definitely going to be the underdog, there is no doubt about it,” insisted Millman. “The stars aligned for me one night in Flushing Meadows, but Roger is one of the greatest ever, he’s a class act and I’ll have to bring my A game to improve on this performance.”

On Tuesday, Aussie wildcard Marc Polmans clinched his first ever Grand Slam main draw win, but singles campaign at Melbourne Park ended on Wednesday at the hands of experienced No.24 seed Dusan Lajovic.

Polmans pushed all the way, before last year’s Monte Carlo Masters finalist posted 6-2 6-4 6-3 onto the scoreboard to book a third-round spot.