Ash Barty showcases her many weapons with an emphatic quarterfinal win over Marketa Vondrousova in Adelaide. 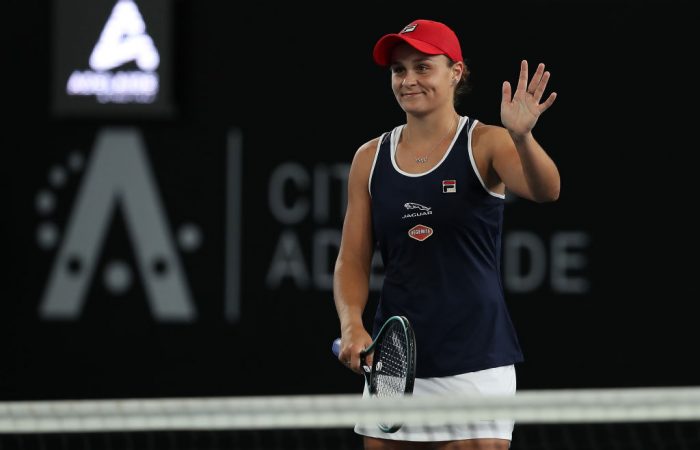 World No.1 Ash Barty has brushed aside any cobwebs and fears about her form with a ruthless Adelaide International quarterfinal triumph.

Barty lost her first-round match at last week’s Brisbane International, and admitted struggling in a tight three-set win in her first appearance in Adelaide.

But any concern about finding touch ahead of the Australian Open, starting on Monday, largely disappeared against world No.16 Vondrousova – still yet to take a set off the Queenslander in four meetings.

“It’s getting better and better with each match I have played,” Barty said.

“That is just a gradual progression of spending time on court and spending time in that competition mode, but all-in-all pretty happy with tonight.

“There are a few things that I’d like to fix for tomorrow, I’m not really concerned about Monday at the moment.

“The beauty is, I have done enough to get myself in the position where I get another opportunity to try and rectify those things.”

Her first serve was hit and sometimes miss, but her all-court excellence ensured passage into a Friday night semifinal against the tournament’s surprise packet, American world No.27 Danielle Collins, who had produced consecutive boilovers against top-15 opponents.

Collins on Thursday blitzed world No.7 Belinda Bencic 6-3 6-1, after her 6-3 6-1 dismantling of world No.15 Sofia Kenin in the second round.

Belarusian Aryna Sabalenka, the world No.12 who has set her sights on Barty’s No.1 crown, meets Ukrainian Dayana Yastremska in the other semi-final.

Last year, Sabalenka defeated Barty in the Wuhan semifinals a – her third win in five matches against the Australian.

Asked if her win over Halep showed the tennis world she had the potential to be a world No.1, Sabalenka replied: “I knew it before.”

The 21-year-old forecast a full-throttle duel in her semi-final against world No.24 Yastremska, with both renowned for their power play.

“She’s aggressive player. It will be really quick tomorrow but I like this (style of) game,” Sabalenka said.

Wildcard Alex Bolt’s Adelaide run, on the other hand, ended at the hands of Felix Auger-Aliassime.

The second-seeded Canadian overcame Bolt 6-3 6-0 in their quarterfinal.

Bolt, an Adelaide resident ranked world No.157, had no answers to a the world No.22 Auger-Aliassime, who will meet Russia’s Andrey Rublev in the semifinals.