Having overcome her own challenges in her rise to world No.1, Ash Barty is inspiring other girls to take to the court – and tells them to "play your way" and simply enjoy their tennis. 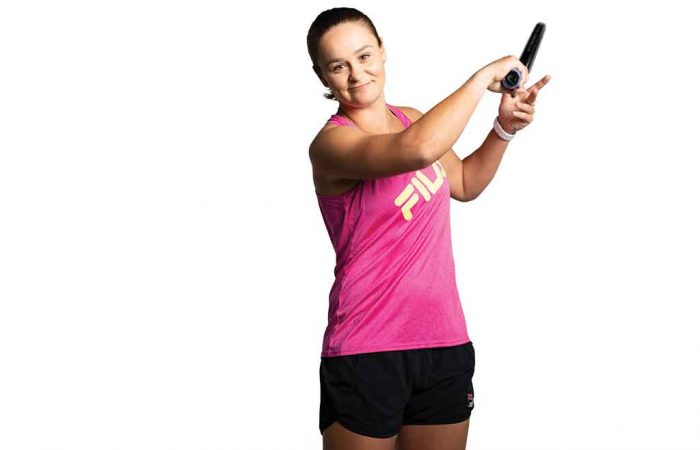 Equally adored for both her breathtaking athletic ability and many role model qualities, it’s hard to imagine that world No.1 Ash Barty ever questioned a future in professional tennis.

There was a time, though, when that sporting path seemed at odds for the naturally gifted Queenslander.

“Some of my barriers were that I didn’t feel like I fit in,” Barty admitted when asked about the challenges she faced as a younger player.

“Both of my sisters went down an academic route and I felt like I was kind of the odd one out a little bit.”

But it was the support of her tight-knit family – parents Robert and Josie, as well as older sisters Sara and Ali – that helped the 23-year-old to not only overcome those mental hurdles, but also tread her own path in fulfilling a huge natural potential.

As Barty entered the Australian summer of tennis as the nation’s first female world No.1 since Evonne Goolagong Cawley in 1976, her mother Josie reflected on Ash’s challenging development years.

“I didn’t really need to worry about encouraging her, because she loved to play – always loved to play,” said Josie of the then-teenager’s natural joy at simply participating.

But with professional tennis requiring long stints of travel, often overseas, a younger Barty became dispirited by the time away from home. Her subsequent two-year break from the sport is well-documented.

It was then that her family’s unconditional love and support proved so valuable.

“When she came home and said she wanted to give up, we said ‘That’s fine. Come home, we know you’re miserable’,” Josie Barty continued.

“She needed to know it was okay to stop, because that was a really hard decision for her to make. Really hard. She was so scared to tell us because our whole lives had been tennis.

“But I said to her that it’s more important that you’re happy.”

Barty’s return to the court was helped by an intrinsic love for tennis, along with encouragement of the close friends she’d made in it – including her long-time doubles partner Casey Dellacqua.

In the second instalment Barty was determined to do things a little differently.

“When she came back, it was all about this time do it your way,” her mother related. “She needed to choose her own people and so she felt like she had control over it. And we just backed her all the way and said, ‘you need to back yourself”.

Thank you Sir Donald Bradman for inspiring a nation and teaching what the true meaning of sport is.
I’m so grateful and incredibly humbled to win The Don award and to share a room with so many Australian Sporting Greats ✨ #SAHOF pic.twitter.com/VxYgt15l82

“They don’t care if she wins the tennis match, they actually care about her first – and that’s the most important thing,” her mother Josie related.

It’s a formula that’s helped deliver breathtaking rewards for Barty, who now counts the 2019 French Open and prestigious WTA Finals among her seven singles titles. Most rewarding of all, however, is how much the world No.1 cherishes her time on court.

It’s not surprising that her advice to other players, at any level, is to simply enjoy their tennis.

“First and foremost is enjoy it. Enjoy the tough moments, enjoy the great moments and I think you learn to work hard,” said Barty.

“Everyone has their own barriers that they feel like they have to break through, but it’s important just to try and keep chipping away every single day, keep working hard and create your own path.”

That positive outlook is helping create a foundation of success for other players, Barty currently leading an impressive 12 Australian women inside the world’s top 250 – all of whom point to both the talent and attitude that makes her such an inspiration.

The 130th-ranked Maddison Inglis, who is also coming off a career-best 2019 season, explains that the world No.1 is both awe-inspiring as she’s accessible.

“She’s insane. I think she’s kind of extraordinary,” Inglis said of Barty’s natural talent. “But she’s such a cool girl as well and we’re so lucky. We train in Brisbane now and she trains in Brisbane, so we get to see her and hit with her.”

And while Kimberly Birrell, another Queensland professional, is only semi-joking as she laughs that “if we could have just one little ounce of her talent that would be so good” it’s Barty’s personal approach that most resonates.

“I think everyone forgets how young she is too. Ash is just such a nice person off the court and she’s just super cool to be around. Always positive and she will always have time for you,” said Birrell.

“When she’s speaking to you, you just feel like you have all the time in the world, which is a really special quality to have. I think we’ve all learned so many things from Ash.

“Even though she’s number one in the world now, I don’t think she’s changed. Her life has changed but as a person, she hasn’t changed at all. She’s just so down to earth and grounded.”

Barty is quick to point out that it’s not only the pros who can experience the wide-ranging benefits of tennis.

Embracing her role model status, the Queenslander is delighted to front a Tennis Australia campaign encouraging more girls to experience the game. Part of a $12 million Federal Government contribution to increase opportunities for females in tennis, it helps to ensure that more girls stay in sport.

“It doesn’t matter whether you’re a professional, you’re growing up through school or it’s a right down at grassroots level,” said Barty. “There’s opportunities for every single girl, all around the country, all around the world and I think that’s the most beautiful thing about it now.”

And while there are many health, lifestyle and even career gains in tennis, the world No.1 is quick to note that not taking the sport too seriously is ultimately most valuable.

“You learn to enjoy it and that’s first and foremost is we play this sport,” said the world No.1.

Join Ash Barty and others by sharing your tennis experiences on social with the #playforyou hashtag.