Ash Barty is maintaining a positive outlook despite a surprise opening round loss at the Brisbane International. 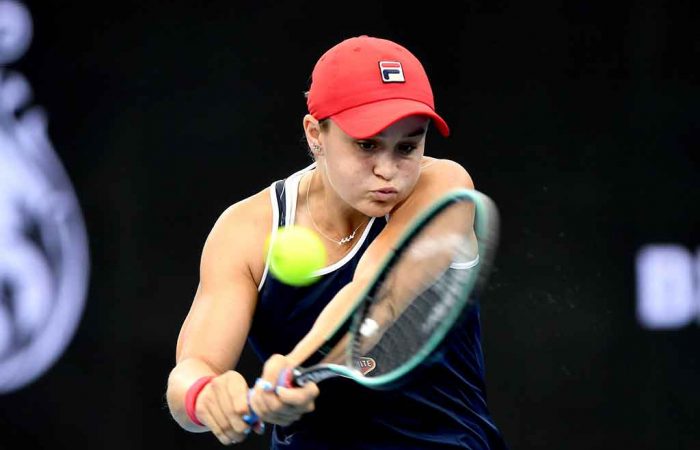 The weight of expectation that comes with being the world No.1 isn’t worrying Ash Barty, despite her 2020 singles season starting in defeat.

In the match following Barty’s at Pat Rafter Arena, Ajla Tomljanovic pushed defending champion Karolina Pliskova to three sets in a rematch of their 2019 quarterfinal.

The 23-year-old Barty couldn’t penetrate Brady’s serve as the world No.53 backed up her first-round win over Maria Sharapova to claim a 6-4 7-6(4) victory.

It’s Brady’s first win over a top 10-ranked player and her first victory in three attempts against Barty.

Barty’s first appearance of the summer was eagerly anticipated by fans but the French Open champion said she wasn’t fazed by the pressure her status as the world’s best has placed on her.

“Oh, I think that’s all come you from you guys (media), if I’m being completely honest,” Barty said.

“Hopefully I make it interesting for you, but I don’t look at it beyond that.”

Brisbane shows its ❤️ for Ashleigh Barty as she walks off court #BrisbaneTennis pic.twitter.com/dysyFRWHFW

Thursday’s match was Barty’s fifth appearance in Brisbane, a tournament in which she is yet to progress past the second round.

Brady looked sharper than Barty given she was playing her fifth match of the season after three qualifiers and Tuesday’s win over Sharapova.

Barty, by contrast, was contesting her first singles match of the year. The Australian’s lack of practice could be seen in her 26 unforced errors but she was also keen to pay credit to Brady, who lost just one point on her first serve and didn’t have to face a single break point.

“You can call it rust or you can just call it a bit of execution,” Barty said.

“For me it was on those returning games. I had probably had half a dozen second serve returns where I failed to make it into the court, in that first set in particular.

“And then Jen grew in confidence.

“You have to give credit where credit’s due.

Barty remains alive in the doubles in Brisbane alongside Dutch partner Kiki Bertens before heading to the Adelaide International next week in her final hit-out before the Australian Open begins.

“Nothing really changes in my preparation for Adelaide,” she said.

“It’s rare in sport that you get an opportunity every single week and so quickly … that’s one of the beautiful things about tennis is that next week you get a chance in Adelaide to kind of come out there and try and execute that little bit better.”