Boosted by inspired performances from Alex de Minaur, Australia is the first team to qualify for the ATP Cup quarterfinals in Sydney. 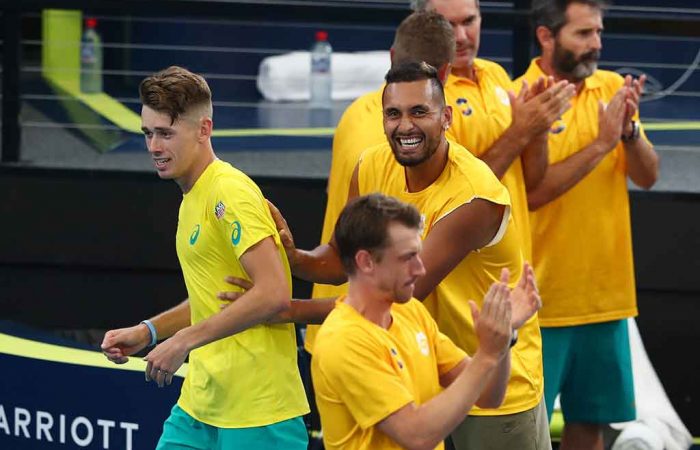 Team Australia is the first team to qualify for the ATP Cup Final Eight after defeating Canada yesterday and taking an unbeatable lead in Group F.

Australia will play Greece tomorrow night in Brisbane before their quarterfinal on Thursday morning in Sydney against the winner of Group C (Belgium, Bulgaria or Great Britain).

Yesterday, Australian men’s No.1 Alex de Minaur rallied from a set down to defeat Canada’s Denis Shapovalov 6-7(6) 6-4 6-2 to put the host country in qualification position.

“I managed to turn things around, get back into a positive mindset, get my energy back and was able to turn it around. So obviously very proud,” De Minaur said.

“I’ve got an amazing team and an amazing captain, coaches, my teammates, they have all got my back.

“On the change of ends I had plenty of words of encouragement to let me know that they’re all there behind me and they all had my back, so obviously I’m playing for more than myself and I wanted to do everything in my power to try and get a point for Australia.”

De Minaur also came back from a set down against Germany’s world No.7 Alexander Zverev to clinch Australia’s opening tie.

Aussies John Peers and Chris Guccione finished off the sweep with a 3-6 7-6(3) [10-8] win against Auger-Aliassime and Adil Shamasdin.

Tickets to Thursday’s quarterfinal day session can be purchased via Ticketmaster.